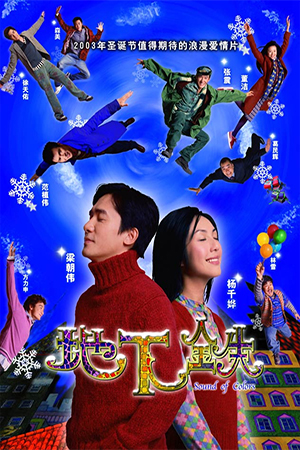 It was another successful year for Miriam Yeung, one that her star in two films that hit the all-important HK$20million mark. At the end of 2003, Yeung released two films simultaneously – ‘Anna In Kung-Fu Land’ and ‘Sound Of Colors’. The latter production saw the singer turned actress re-united with Tony Leung Chiu-Wai – her co-star in the financially lucrative, yet artistically disappointing ‘My Lucky Star’. With regular Yeung cohort, Joe Ma, at the helm, everything was in place for another assault on the local box-office.

Since a childhood accident left her blind, Cheung (Yeung) has led a contented life with her doting father, but deep down she yearns for companionship. After her father happens upon a flier for a dating agency, Cheung decides to sign up and find a prospective suitor. The conniving owner of the agency, Ho (Tony Leung), decides to take her on even though he is far from confident that he will find her a date. Every avenue Ho tries in his quest to find Cheung a boyfriend fails, but he begins to feel a subtle closeness to her himself. These feelings grow when Ho awakes one morning to find that he has also gone blind – a condition that no doctor can explain to him. Now needing to rely ever more on his close friends, Ho is also aided by Cheung and her optimism helps him through the difficult situation. Meanwhile another budding love story is beginning to unfold in China where a young man travels to meet a heart-broken woman he has been guided to. Both relationships, however, have to overcome considerable hurdles before they can enjoy their inevitable happy ending.

Based on the romantic graphic novel, ‘Sound Of Colors’  is a saccharine sweet romance that revels in its impressive production values, but disappoints with its overall effect. Unlike many of Miriam Yeung’s other films, ‘Sound Of Colors’ is a straight romance with only a few very minor comic indulgences and, as such, it may prove a bit too ‘twee’ for some. Sentimentality is certainly not a crime; when done well (i.e. ‘C’est La Vie, Mon Cherie’) it can still provide the emotional punch that such a genre needs. ‘Sound Of Colors’ does have enough heart to make its two relationships real, but there are too many other inconsistencies to contend with, therefore any chance of Joe Ma producing an ageless classic are very limited.

The inherent difficulty of ‘Sound Of Colors’ is its troublesome format. While the linking of two budding relationships is not an especially bad idea, it is clearly a challenging one to pull off. The obvious danger is that one of the focal points will be slightly nudged aside in favour of the other – a problem that is the particular affliction of Joe Ma’s film. Miriam Yeung and Tony Leung’s romance forms the main body of the narrative and, though there is initially interest in it, Chang Chen’s love is gradually moved to the background. Both stories therefore get in each others’ way – both stories seemed to have potential, but one is much more successful than the others. Perhaps neither storyline would’ve sustained the full running time, but we’ll never know. The twists retain their appeal to the story and Joe Ma does conjure up a few touching moments; the added use of illustrator and creator Jimmy’s work mixed with some live action moments is particularly heart-rending.

Though I’ve spent time outlining the criticisms for ‘Sound Of Colours’, there’s enough quality here to counteract the problems. Miriam Yeung is excellent as Cheung, giving her character a real mixture of genuine pathos, hope and beauty (though I’m probably biased). The superlative Tony Leung is typically assured, Chang Chen hugely empathetic (though underused) and there’s some pleasant supporting roles for Lam Suet, Eric Kot and Matt Chow. Joe Ma also succeeds in creating a romantic atmosphere that Vincent Kok’s ‘My Lucky Star’ truly lacked. Carving out a few gentle, yet emotionally charged sequences, Joe Ma has a far better control over his vision and aims than Kok had. ‘Sound Of Colors’ is bright and visually encouraging, has the advantage of two performers with the Midas Touch at the moment and a genuine feel-good effect. If the intrusive, over-used piano that tinkles away on the soundtrack had been restrained and the storyline better harnessed, ‘Sound Of Colors’ could’ve triumphed over its predominantly sentimental short-comings. As it is though, the production cannot sustain its appeal nor can it do justice to the grand themes of loneliness/love that it attempts to tackle.