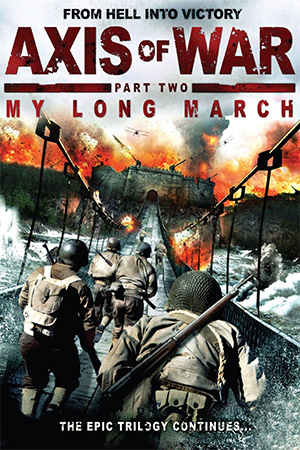 The second part of the ‘Axis of War’ Trilogy (I seem to be bizarrely watching them in reverse having started with the final chapter, ‘Night Raid’), ‘My Long March’ certainly gives the war epic a good old try and opens and ends with some spectacular war combat but is ultimately a lethargic slog through over earnest cliché. No speech is too rousing, no death goes without over-dramatics and intrusive music and what should have felt like a dangerous journey across a war torn land feels anything but with much of the running time given to endless speeches about how great it is to be a soldier for The Red Army. Fair enough but this does not make for an engaging film and character is all but sacrificed in favour of a bunch of undistinguishable talking heads.

Things start off impressively enough with a chaotic bombing raid which sees a family (all enlisted in the army in some capacity or another) trying to stay alive and find each other. There is a frantic urgency established as one of the above mentioned family tries desperately to search for her father, making her way through a constantly marching army of thousands. But then events take on an over sentimental earnestness and need to extoll (constantly) the virtue of Chairman Mao’s army, as a vast legion set off on a dangerous march. However, the filmmakers squander any real sense of peril or journey as the march is constantly broken up by overt flag waving for the Red Army and (what feels like) near constant scenes of the young main character losing family member after family member. It’s certainly a neat hook to hang the film on, to see this horrific period of war through the eyes of a young soldier who shows bravery and tenacity beyond his years, but the character just becomes another prop to hang more sentimental speeches and scenes on.

Unfortunately, this drags the film down and while there is a noble intention to celebrate the heroic deeds of these Chinese people, proceedings just become a slog. ‘Night Raid’ (the third part of the trilogy) at least had more likeable and rounded characters to warm to, making its propaganda slant a little easier to deal with but ‘My Long March’ features no such characters. And the less said about the turn of events that sees a female army member uniting two opposing armies through the power of song, the better.

War aficionados will certainly get their combat fix with the impressive opening and incredible finale which sees the troops attempting to take control of a fortified citadel by crossing a dangerous looking chain link bridge (and deceptively the trailers are made up of footage entirely from these two sequences). However, these don’t make ‘My Long March’ a good film and it is only recommended to war completists and those who find overt sentimentality and propaganda pushing easier to swallow.