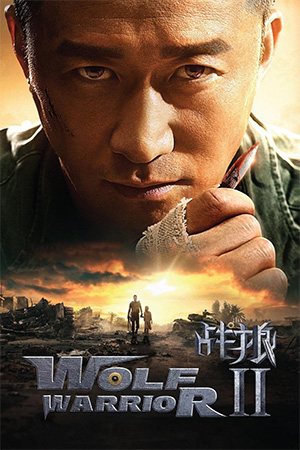 Audaciously opening with a seemingly one take shot (several stitched together with neat editing/CGI tricks) with the camera panning down from the sky to a tanker at sea about to be attacked by pirates, Wu Jing’s heroic soldier Leng Feng dives into the water, knocks said pirates from the vessel, engages in an underwater fight, before tying them up (still all underwater), then emerges on their boat (barely out of breath), picks up a sniper rifle and shoots and kills another pirate brandishing a bazooka on a separate boat at least a mile away! It’s perhaps the most epic introduction an action hero has ever had and immediately sets the tone for this big, brash, blockbuster sequel.

This time Jing’s superhero soldier finds himself in a spot of bother after returning home to deliver the ashes of a former comrade to his family and gets in a scuffle with some locals. He’s court-martialled and kicked out of the Wolf Warriors and relocates to Africa where he finds himself in the midst of an ongoing war. Helping to deliver aid to those in distress it’s not long before he’s back in the thick of the action as he’s enlisted to help find a doctor, who may have a cure for a disease that is wiping out the local population, and keep her and a band of would be resistance fighters safe from the marauding army and a squad of evil mercenaries (led by the snarling Frank Grillo) who are also after said vaccine.

The first ‘Wolf Warrior’ was a big smash and showed Jing’s capability for orchestrating action scenes and wholesale destruction on a grand scale all the while ramping up the super heroics of its lead character and the might of the Chinese army. Subtle it wasn’t but entertaining it was. ‘Wolf Warrior II’ follows a similar template but ramps it up tenfold as Jing unleashes a barrage of super charged action sequences utilising the African locations and access to a never-ending supply of military hardware to the best of his ability. Jing rips through the film, Africa and hoards of bad guys at an unrelenting pace as the action gets bigger and bigger. Much like the first film, the action focuses more on vehicular destruction, excessive firepower and a never ending succession of explosions with a little bit of martial arts combat thrown in. From a brutal fight in a hospital, to a bullet strewn car smashing chase through a shanty town to a finale that literally features tank-fu (!), the action is huge in scope and impressively staged using real stunt work.

While the action is heightened to almost super heroic levels the film, much like the first part, doesn’t shy away from violence. The body count is insane as hundreds of soldiers and civilians are slaughtered, often in bloody fashion, as there seems to be an unlimited number of faceless bad guys for our hero to mow down. So, again much like the first film, it’s back to 80s action basics as the name of the game is to blow up and shoot as many bad guys as possible. It does somewhat sit at odds with the colourful palette of the film (all bright comic book colours) and the playful banter between Jing and leading lady Celina Jade but certainly gives the action a visceral edge. In ‘Wolf Warrior’ Jing got to go toe-to-toe with the great Scott Adkins and this time around he’s roped in the great Frank Grillo. While his character could have had more to do than just snarl the obligatory “find him and kill him!” he does look to be having fun and gets a brutally epic fight with Jing. Likewise, his crew of bad ass mercenaries allow several stunt actors to really shine in memorable supporting roles not least the towering Oleg Prudius and firecracker Heidi Moneymaker: seriously give her an action film now!

In amongst all the carnage and chaos there a few subplots to be found: Feng searching for the supposed killer of Yu Nan’s character from the first film, a motley crew of Chinese would-be warriors who come to Feng’s aid and (another staple of 80s action films) a shoe horned in kid for a our hero to look out for. Yet, it’s the action that makes the film and while subtlety has long left the building (Feng’s approach to rescuing hostages trapped in a hospital: crash his jeep into the hospital with scant regard for the safety of said hostages!), ‘Wolf Warrior II’ excels in delivering adrenaline charged, brilliantly choreographed, stunt filled action that should sate even the most rabid action fan. Also, stay through the end credits for a ‘Wolf Warrior III’ sting!