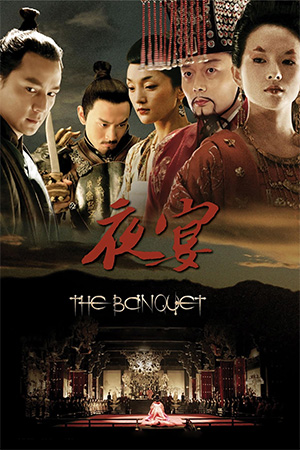 Lavish Chinese spectacle that relocates Shakespeare’s Hamlet to the Tang Dynasty as treachery and murder abound in the imperial court of Emperor Li (Ge). Having murdered his own brother, Li takes his dead sibling’s wife, Empress Wan (Ziyi), as his own wife and plans a lavish coronation on the 100th day of their union, uniting them as rulers of the land. Meanwhile Li’s nephew Wu Luan (Wu), returns from self imposed exile and an attempt on his life from his uncle with the intention of upsetting Li’s plans for rule. As the night of the banquet arrives, alliances are drawn, murder plotted and everyone’s true feelings and intentions laid bare as the fight for power and control reaches an inevitable violent end.

There is no doubting Feng Xiaogang’s ambitious intentions and for the most part he creates a visually dramatic tale. The level of detail, colour and period style is often astonishing and all beautifully realized and rendered. The camera almost glides through this stunningly created world, shots often composed to near perfection, the opulent world and lifestyle the characters live in immersing the viewer in its beauty. Feng also, for the most part, sticks to the dramatic themes of the story and the manipulations of the characters, rather than going for an all out martial arts fantasy. Unfortunately, the drama, of a particular melodramatic variety, can’t help but drag come the second half, the characters not always as engaging as they should be. No fault of the cast, as they are uniformly good, especially the very beautiful Zhang Ziyi, but with little to like about them, the character drama does tend to lose its way as everyone double crosses everyone else. We are not always left with anyone to sympathize with. But then, such is the case with political and emotional blackmail and treachery.

While this isn’t strictly an action film, ‘The Banquet’ still has some dazzling martial arts on display. Choreographed by Yuen Woo Ping (‘Crouching Tiger, Hidden Dragon’, ‘Iron Monkey’), the fight scenes are often breathtaking. While there isn’t an abundance of them, Feng Xiaogang and Ping still put as much effort into these scenes as the rest of the film with Feng not being shy about splashing the blood around. Wuxia based, with characters able to fly and glide through the air effortlessly, the fight scenes will please fans of wire-fu and are all expertly choreographed, including an impressive and sustained fight set in what appears to be an outdoor theatre made of bamboo.

Comparisons to ‘Crouching Tiger, Hidden Dragon’ are unavoidable but ‘The Banquet’ is completely different in tone and execution. While it doesn’t always engage and could have used a little more oomph come the second half, Feng Xiaogang’s film is still a decent attempt at dynasty drama. Don’t expect a full on martial arts epic but do expect a lavish drama with some action which is absolutely beautiful to look at.