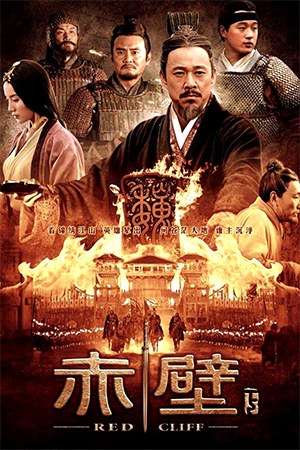 John Woo’s epic vision of the ‘Battle Of Red Cliff’ concludes with this two hour-plus spectacular, a fitting end to a film project that will surely stand the test of time. A masterful blend of computer graphics and copious amounts of good old-fashioned extras and carefully constructed sets make this another 148 minutes of electrifying Chinese cinema.

Cao Cao may have lost the last battle, but his vast forces seem to indicate that he will win the war against the rebels. As he relaxes with his advisors, Sun Shangxiang (Zhao) infiltrates his camp and begins to note all of his stratagems before she can be detected. When an epidemic of typhoid hits his kingdom, Cao Cao fiendishly ties the bodies to rafts and drifts them down the river to the enemy, decimating their forces and morale. Their ebullience has been crushed and Cao Cao has successfully divided their forces as Liu Bei takes his demoralised army away from combat. A lack of manpower and a severe lack of arrows leaves Zhou Yu and Zhuge Liang teetering on the brink of collapse.

What Cao Cao’s opposers lack in sheer force they make up for in dogged determination and Zhuge Liang devises a way of getting the arrows needed in an ingenious way. Meanwhile Zhou Yu concocts a way of turning the antagonists against one another to regain the upper hand, cleverly breaking up the naval intelligence that Cai Mao and Zhang Yun provide. With intelligence about Cao Cao’s tactics to assist them, the stage is set for a monumental battle on two fronts to end the war: the hopelessly outnumbered fleet using the information to their advantage while Zhou Yu leads his fellow generals to a final assault on Cao Cao’s heavily defended fortress.

‘Red Cliff’ left the story of the Three Kingdoms deliciously balanced and so a way of concluding all of the plots and intrigues would take special effort from a director who we had forgotten had that ability. Starting with an uneasy CGI dove that reminded me of the beginning of ‘Clash Of The Titans’, the opening implied a worrying regression back to the Woo clichés we all chuckle over now. Yet any fears of the conclusion to ‘Red Cliff’ not proving to be a fitting sequel are soon abolished as the director rolls back the years to when his name was uttered in hushed tones. To tell a complex story with such clarity, while also successfully orchestrating some of the greatest battle scenes in history, is a feat that John Woo achieves with aplomb. In nearly every way, part 2 is better than its predecessor and an event not to be missed.

The international print has been criminally truncated to 148 minutes in total, a whole half chopped away for easier consumption. To Chinese audiences, this must seem as disrespectful to the source material as trying to condense the ‘Lord Of The Rings’ trilogy into three and a half hours. In so doing, John Woo’s vision is compromised and two genuine ‘epics’ are needlessly thrown together, missing such wonderful scenes as how Zhang Liang acquires the 100,000 arrows he promises to deliver. For a director whose value has dropped from the heights of the international avant garde to the ‘Poundstretcher’ bargain bin, this must be hard to swallow. It is with this in mind that I implore you all to watch both parts in their entirety as they deserve 280 minutes of anyone’s time (it might be good to have a break in between though).

‘Red Cliff II’ fleshes out its characters beyond their legendary status and a few sub-plots that threatened to overwhelm in the original suddenly slot in perfectly. All of a sudden, the revisionist inclusion of Vicky Zhao’s Sun Shangxiang is justified and her part in the overall narrative superbly blended in. Tony Leung, Chang Chen and Takeshi Kaneshiro are every bit as good as could be expected though Zhang Fengyi’s uncompromising portayal of Cao Cao leaves with the acting chops. Nevertheless, the ‘Red Cliff’ project is about the work of John Woo, his vast production and creative team and a record budget that is utilised so expertly that every last yuan can be seen in the mise-en-scene.

With Taro Iwashiro’s beautiful score resonating in my ears long after the end credits have rolled and some of the greatest visuals ever committed to celluloid burnt onto my retina, it’s fair to say this project has been a resounding success. Part 2 is certainly the superior one, but both deserve individual credit for reviving the dying embers of John Woo’s career. It’s difficult to see how any future historical epic – and after ‘Red Cliff’ that that term will have to be reappraised – can hope to top this very special production.