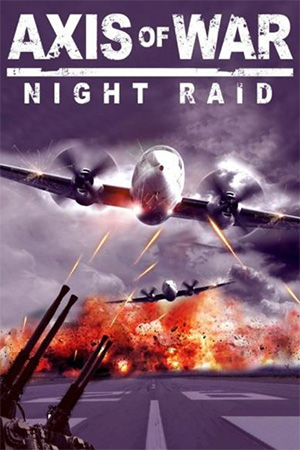 The third part in the ‘Axis of War’ of trilogy (following ‘The 1st of August’ and ‘My Long March’), ‘Night Raid’ throws the viewer straight into the action (quite literally) with a Chinese rail yard coming under heavy fire from Japanese planes. Surviving the mass destruction, a platoon of Chinese soldiers retreat from the front lines and make their way across land, forever hounded by Japanese scout planes. While on their journey they discover a hidden Japanese air base, responsible for housing the planes that are constantly slaughtering the Chinese. Instead of continuing their retreat, the plucky platoon hatch a plan to destroy the airbase, under the cover of night, and bring down Japan’s unrelenting air support.

Having not seen the previous entries and with this entry hitting the ground running, one had to get up to speed fast but thankfully after the opening onslaught of explosions, bullet riddled deaths and, well, more explosions the narrative calms down somewhat and ‘Night Raid’ turns into a more straightforward tale of a group of soldiers banding together to destroy an important enemy base. Evoking an era of bygone war films, ‘Night Raid’ proved to be surprisingly entertaining in its old school approach. While the characterisation isn’t of any great depth, the characters are surprisingly likeable and make for an endearing bunch of struggling soldiers. Unfortunately this being somewhat a propaganda piece for the Chinese army the Japanese are thinly drawn, simply evil bad guys to be blown up come the end. Proceedings also slip into melodramatics and take a turn for the over earnest with much waxing lyrical about the evils of the Japanese and forging the unity of China.

This also tends to drag the proceedings in-between all the big set-pieces, though the likeable characters and the want for them to succeed helps to carry the viewer through the less exciting parts. While not quite as crammed with action, destruction and war combat as the trailer might suggest, ‘Night Raid’ is still book-ended by some spectacular set pieces. Utilising old school practical effects, real stunts and the welcome use of effective miniatures (and for once keeping CGI to a minimum) the film features some spectacular war themed action. The climactic raid on the air base is an epic, especially for the budget, explosion heavy and emotionally tinged action sequence. Those looking for their graphic war combat fix should be fairly sated by the impressive spectacle on show in ‘Night Raid’.

Despite the odd dip into cheesiness, lethargic storytelling and over earnestness, ‘Night Raid’ is still an enjoyable slice of war action with an intriguing story and some likeable characters at its core.