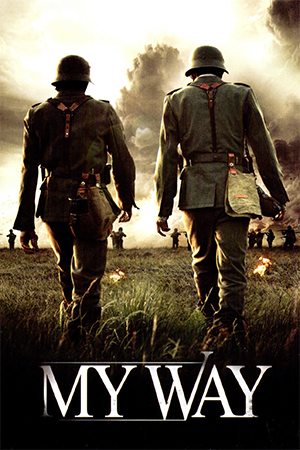 During Japan’s occupation of Korea, two boys meet and share a rivalry based on their skills at long-distance running: Kim Joon-Sik is an impoverished Korean whose raw talent is obvious to all around while Tetsuo is a junior champion in Japan who has moved abroad with his influential family. Their competitiveness continues through their high school years and despite their lives moving in significantly different trajectories, seem destined to be eternal rivals. After a controversial decision to disqualify Kim from the Olympic try-outs after he scores a clear victory, a riot breaks out between the oppressed Koreans and their Japanese masters. The punishment for Kim and his friends is enlistment into the Imperial Army and an horrific ordeal on the Mongolian front.

Once again, the lives of Kim and Tetsuo are entwined when the latter is made commanding officer of Kim’s press-ganged unit, discharging his duties with terrifying zeal. Their rivalry now takes an ugly turn as the unit is pushed into a suicide mission that the reluctant Korean soldiers refuse to participate in. Tetsuo orders Kim’s execution, but events take even more dramatic turns and it appears as if the two former marathon runners are essential to each other’s survival through the apocalyptic arena of World War II.

It’s been a long wait for Kang Je-Gyu’s next film following the great success of ‘Brotherhood’: seven years separate the release of the Korean War masterpiece and this latest unapologetic epic. It might sound glib to say it is unsurprising that the film-maker has return to the themes of kinship and conflict considering those past glories. Yet ‘My Way’ is a more ambitious, more international film that indicates the ambitions of Kang Je-Gyu are not just aimed at his native Korea. With lavish financing and a cast of notable Asian actors, this is 150 minutes that takes place on a quite incredible scale.

Sadly, ‘My Way’ does lack the intimacy and national significance of ‘Brotherhood’, clearly aiming for global recognition in a way that is unlikely to be admired in the same way. That’s not to say that this isn’t a bold, brash and often admirable production, but it never quite engages emotionally the way his devastating 2004 hit did. Kang Je-Gyu clearly tries to trump it, attempting to pile the dramas on top of one another until they create an unbalanced, melodramatic edifice that wobbles under its own bloated weight. There are just too many moments when the soundtrack is noticeably building in intensity as the scene ripens to yet another minute of ‘grandstand cinema’. Due to this awkward bathos, ‘My Way’ blows its chance of being a truly grand work of film the way ‘Brotherhood’ arguably was. Also detrimental to the story is the character of Kim Joon-Sik whose one-dimensional heroism is constantly repeated and carefully orchestrated to make him almost superhuman.

The pan-Asian cast is excellent throughout with Jang Dong-Gun suitably noble despite his underwritten character while Joe Odagiri has a much more subtly layered role that allows him to walk away with the acting chops. Native German and Russian speakers might take issue with the accents and delivery of the Western actors, but these are relatively minor characters. No expense is spared to afford the performers the period detail they can work with and authenticity appears mostly correct.

Despite its faults, ‘My Way’ is undeniably impressive and moving. There have been a plethora of realistic battle scenes since the release of ‘Saving Private Ryan’ and there is always a danger that combat fatigue begins to set in with the viewers. Yet Kang Je-Gyu’s latest work offers a quite extraordinary recreation of the gruesome futility of war, so much so that there is a danger that, after over two hours of such scenes, it’s easy to be overwhelmed by the whole effect. There have been numerous war epics depicting every possible side of conflicts, but perhaps in a modern world where warfare simulation has become photo-realistic participation where the most graphic kill is likely to generate high-fives from joypad users of every age, a reminder of the utter fear and despair of combat can never be over-emphasised.

‘My Way’ is a based-on-true-events film with significant embellishments and dramatic orchestration. Of course, that’s not to say it isn’t very affecting overall though.