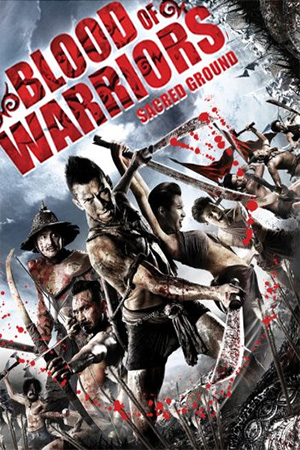 A sort of sequel to director Tanit Jitnukul’s 2000 brutal epic ‘Bang Rajan’, ‘Blood of Warriors’ is another low budget historical action flick that gives being epic a good go but unfortunately falls short of its ambitions. A small but damn tough tribe of warriors, inspired by the fighters of ‘Bang Rajan’, decide to club together and take on the marauding might of the Burmese army. Despite being small in numbers and with famine knocking at their village door, the hard-as-nails soldiers keep fighting back and attempt to unite other clans in their cause so they can overthrow the mighty imperial army once and for all.

While it contains a decent enough share of bloody and brutal fight action, ‘Blood of Warriors’ is a drawn out affair that, despite a solid opening half hour or so, is often quite tedious. There is just too much time given to rousing speeches, attempts to unite the different clans and over-earnest monologues about how great it is to be a warrior and how it is important to fight for one’s country/village/life etc. Which is fair enough as these things are important if one or one’s home is being overrun by an army, but not when it is this drawn out and monotonous. While the cast look the part and acquit themselves well in action they don’t do so well at delivering these speeches/monologues, which means us the viewer, never really care about them or what they are fighting for. It doesn’t help that these low rent Thai historical epics have been a dime a dozen recently meaning it’s not something you haven’t seen before (if you are into these kinds of films that is!).

Considering this is called ‘Blood of Warriors’ it isn’t quite as saturated with action, as you would think it would be. That is to say this reviewer at least expected a bit more than what was on offer. The first half an hour or so has a few decently sustained fight scenes featuring multiple combatants hacking and slashing at one another. It’s all bloody and brutal stuff, mounted with verve, but then all the melodrama mentioned above kicks in meaning the fight action doesn’t return until the last twenty minutes. It’s not as good as what has come before and is marred by too many dodgy CGI effects giving it a kind of low rent ‘300’ look.

As mentioned earlier, ‘Blood of Warriors’ certainly tries its best but is far too hampered by the excessive melodramatics and the general feeling of historical action epic fatigue.