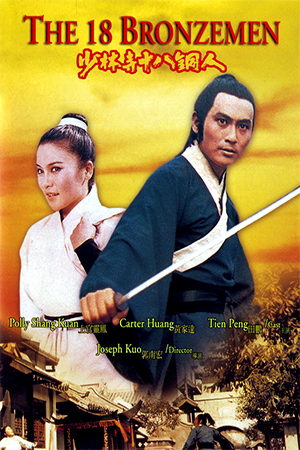 The much-reviled Ching government decide to eradicate any opposition to their rulership by attacking pro-Ming families in the kingdom. One such attack sees an influential official killed, though his wife and son manage to escape thanks to the intervention of a close ally. While on the run, the son, Shaolung, is aided by his father’s close friend (Jack Long) who teaches the young boy the basics of kung-fu. As time passes, the renegades must once again move on and evade capture by the Ching army. However, it is decided that the safest place for Shaolung to hide would be in the Ming-friendly Shaolin Temple where he could also further his knowledge of kung-fu. Once there, the boy finds the severe, disciplined lifestyle hard to cope with and, despite his best efforts, he lags behind his fellow pupils. Over time he does make a couple of close friends and it is their encouragement that drives him to reach his goals. Now a young man, Shaolung (Tien Peng) gradually develops into a formidable fighter and concentrates his sights on leaving Shaolin to avenge his father’s death. However, to ‘graduate’ from Shaolin means to defeat the Shaolin bronzemen and a series of similarly fiendish tests. The first attempt to conquer these trials is unsuccessful, but Shaolung is spurred on by his straight-talking friend (Wong) and finally leaves through Shaolin’s hallowed gates after a final tremendous effort.

Of independent maestro Joseph Kuo’s many kung-fu hits, ’18 Bronzemen’ is perhaps the one that has had the most influence throughout the latter years of the genre. Since its creation in 1976, this relatively lavish production has seen many of its elements creep into a number of other films, ranging from the Shaw Brothers hits to low-budget attempts to feed of the popularity of the concept. Thankfully, even though the themes and situations are mercilessly etched in the minds of all fans, this still retains an excellent entertainment quality. Kuo’s makes good use of a fairly generous budget, splashing the money on the above-average set design and utilising a small army of extras. The cinematography is also slightly more polished than the usual independent fare and shows the kind of spark that sadly wasn’t present in all of Joseph Kuo’s films, while the action holds its own today after over twenty-five years.

Kuo deserves recognition as a director within the martial arts cinema world, though his abilities are limited. His qualities are clearly seen here i.e. the innovation without a major studio behind him and that extra touch of class that lifts him above the many other directors who toiled in the independent field. Nonetheless, ’18 Bronzemen’ does give way to the weakness that have often hamstrung the director – namely the definitive sense of control that makes the difference between the great and the good. Importantly, Kuo lets the odd moment of peculiar editing affect an otherwise slick kung-fu drama; the final twenty minutes in particular seems far too rushed in comparison to the majority of the film. Perhaps the pressure to mold this potentially epic movie into a convenient 90-minute chunk means that ’18 Bronzemen’ doesn’t have the courage of its convictions and squanders its chance to be a landmark film. ‘The 36th Chamber Of Shaolin’ remains the seminal Shaolin-training epic, but ’18 Bronzemen’ has much to help it stand out from the crowd and is by all means a recommendation.