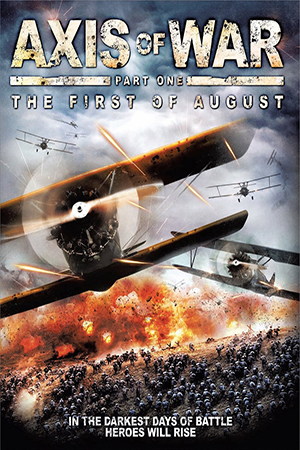 The first instalment in a trilogy of Chinese war films (the subsequent instalments being ‘My Long March’ and ‘Night Raid’), ‘First of August’ deals with the fateful date when the Communist Alliance did battle with opposing insurgents in the city of Nanchang which saw the birth of the first Chinese Independent Revolutionary Army. In the lead up to the battle, allegiances are tested and pushed to breaking point, both among the upper level strategists and the on the frontline ground soldiers, as nerves take hold and the best  course of action is deliberated on.

While there is a smattering of large scale war combat at the beginning of the film and in the closing minutes, ‘First of August’ is the least war action orientated of the trilogy and will no doubt be disappointing to those expecting lots of epic war battle scenes. This is also disappointing in that the artwork and advertising promises much grand scale war action but delivers very little of this: see ‘Night Raid’ for some impressive war action and a more boys own adventure style military film. Instead, this instalment is more concerned with the politics and schemes carried out by those involved in the planning and decisions that lead to the attack on August 1st 1927. This is all well and fine but is perhaps delivered in an all too dry and over earnest manner (with a good dose of melodrama and intrusive/patriotic sounding music) and at just over 90 minutes long, it feels as though a lot has been rushed through (or simply cut out) to get to the battle of August 1st.

Again all well and fine if the battle proceedings had been building up to had been an impressive and sustained pay off but it is instead rather rushed through and takes up all of a few minutes in the final stretch of the film. Sure, there are some impressive pyrotechnics and some of the stunt men are certainly put through their paces but (and this may be this reviewers avid appetite for large scale action and destruction needing sating!) the sequence feels a little anti-climactic. The film does have a refreshingly old school feel to it with proceedings seemingly all shot on location with a large cast of extras (no CGI here), the cinematography is often stunning and the filmmakers do squeeze out the odd arresting visual: the camera tracking the feet of a platoon commander as he walks through a blood drenched trench after a battle.

However, this is only for the war history (and propaganda/sentimentality pushing) completist out there.  Those wanting a war combat fix best look elsewhere.