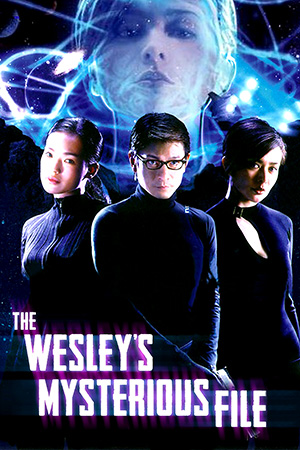 After numerous other outings in differing productions, popular fictional character Wisely (here Wesley) is given a big-budget adventure to feature in. Once again Wesley is plunged into a extraordinary scenario exploring the usual science-fiction trends and the intrigue surrounding the authorities. Here though, the character is given the familiar Hong Kong blockbuster treatment of the past few years with an all-star cast and an abundance of computer effects.

With a reputation known throughout the world as an expert in all things extraterrestrial, Wesley is asked by his U.N. employers to look into a series of alien sightings in San Francisco. During a near-death skirmish with a monstrous alien, Wesley is saved by a mysterious woman who possesses incredible powers. Closer investigation with the help of the F.B.I. reveals that this saviour is in fact Fong – an alien from the planet Dark Blue, a so-called ‘Blue Blood person’. A reunion with Fong gives Wesley a chance to unite his mind with hers and understand her past and her current plight. Unfortunately, hot on their heels are two destructive aliens who have followed Fong to find the location of the sacred ‘Blue Blood Bible’. With duplicitous superiors to contend with as well, the adventurer and the few colleagues he can trust decide to help the beautiful alien and help her get back to Dark Blue. However, first they must think of a way to defeat the hunters on the trail.

As is to be expected from the director/screenwriting team of Andrew Lau and Wong Jing, ‘The Wesley’s Mysterious File’ is an exercise in style over substance. The title isn’t the only baffling thing about this convoluted science fiction film. With jargon thrown in at every opportunity, director Lau attempts to create an intelligent blockbuster, but blatantly fails to do so. What should have been an enjoyable caper in the mould of ‘Legend Of Wisely’ instead falls into the trap of taking itself too seriously. As is becoming an increasing problem with recent Hong Kong hits, the makers have forgotten to make this film as entertaining as it promises to be. Therefore the strength that made the Jade screen so unique is slowly ebbing away and is being replaced by the desire to mimic Hollywood without embracing the qualities that made us all gravitate towards the East.

‘The Wesley’s Mysterious File’ has its qualities though and it is perhaps the fact that these exist that make the film an overall disappointment. The opening twenty minutes gradually develops quite an exciting narrative with some good computer effects thrown into the blend. Andy Lau also seems quite at home as the self-confident Wesley and looks to add some tongue-in-cheek flavour to the production. Unfortunately this proves to be a brief period of invention in an otherwise standard flick. A cast of real stars has been assembled and coupled with effects that range from the good to the poor, but overall this is still a cold film with very little heart. Three stars, but hardly a good recommendation.