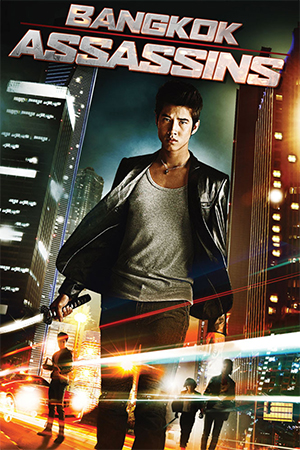 After they are kidnapped from their families by a gang of criminals, four kids are rescued and raised by a skilful Shaolin Master who teaches them the art of his craft. Tragedy strikes this newfound family however, when their beloved master is savagely murdered. Although they initially struggle to come to terms with the loss, the boys quickly realise that they can accomplish anything as long as they stick together. Now they must combine their skills so that they can take revenge on the man responsible for their master’s death.

‘Bangkok Assassins’ opens with some depressingly real life statistics about child kidnapping before setting the stage for what you will assume is going to be an action-packed revenge saga. Unfortunately though, this isn’t quite how it plays out and the film seems somewhat confused about the story it is trying to tell. Rather than delivering on its initial promise of having kung fu masters kicking the stuffing out of bad guys, the film spends the majority of the running time on a ridiculously badly played out teen romance; one girl likes the pretty boy who just so happens to be a promiscuous loner, but there is also a quiet pretty boy who she is strangely unaware of… ARGH! Yes, it really is that mind numbingly awful and the performances from everyone involved are laughable.

The so-called action in ‘Bangkok Assassins’ doesn’t fair much better either. Despite what the advertising may lead you to believe, there doesn’t appear to be any actual fight choreography involved and the emphasis is solely on the mystical side of kung fu. This means that the majority of the fight scenes are made up of two people standing miles apart and waving their hands around until someone falls over. To make matters worse, all of this is presented in pointless slow motion with ropey CGI effects used to represent the special moves. Oh, and one of the pretty boys will normally wind up taking their shirt off and getting splashed with water. Truly some of the worst on-screen “fights” I’ve seen in a while.

‘Bangkok Assassins’ doesn’t even come close to being the action movie it claims to be, and is in fact an atrocious teen romance that just so happens to feature some very bad fight sequences. Do yourself a favour and use your valuable time doing something else… anything else… please?!