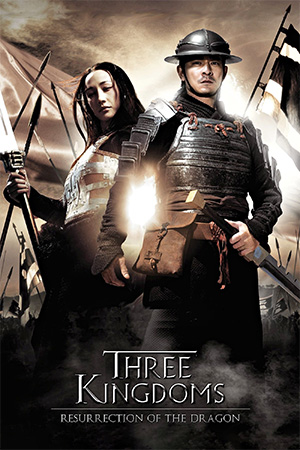 Exceptional warrior Zhao Zilong (Lau) joins the ranks of warlord Liu Bei’s Shu kingdom army. As his bravery and skill sees him rise through the ranks, Zhao befriends portly general Luo Ping’an (Sammo) and the two become sworn brothers against the backdrop of the vast battle for the future rulership of the land. Zhao becomes a constant thorn in the side of Cao Cao’s superior forces and survives a solo mission against thousands of the enemy to rescue Liu Bei’s son. Cao Cao’s young grand-daughter, observing the battle as the general in training, swears to avenge the humiliation and capture Zhao alive.

Despite decades passing, the war continues to rumble on and Cao Ying proves to be every bit as capable as her grandfather was. Septuagenarian Zhao is determined to support his own side in every way and persuades his superiors to use him in the upcoming battle against Cao Ying’s powers. Yet his participation is exactly what she had hoped for and Cao Ying prepares to gain revenge while also conquering Yellowbird Peak.

One of the two current re-tellings of ‘Romance Of Three Kingdoms’, Daniel Lee’s effort focuses on a far more intimate story. As John Woo’s ‘Red Cliff’ project is a spectacular par excellence, the idea to concentrate on just a few of the story’s major characters is a necessary one. Not that  ‘Three Kingdoms: Resurrection Of The Dragon’ is a modest production – the screen is awash with extras and impressive sets, culminating in a series of grand set-pieces. Yet this is never intended as the definitive version of one of China’s greatest literary works, just as well considering it is competing with John Woo’s magnum opus.

‘Three Kingdoms: Resurrection Of The Dragon’ impresses with its gritty, dusty locations and a clear focus on more small scale hand-to-hand combat. There are the obligatory scenes of multitudes in battle, but Sammo Hung’s typically exquisite choreography also highlights realistic one-on-one confrontations. This immediately sets it apart from the  fantastical fights of the Zhang Yimou-inspired productions and those epics that focus on vast spectacles, offering something a little different to the jaded viewer. The appearance of a variety of genre greats also adds to the apparent authenticity of Daniel Lee’s film; seeing a bedraggled Ti Lung alongside a grizzled Yueh Hua is a pleasant contrast to the usual array of photogenic stars that dominate much of the cast.

While the commendation is easy to give, the weaknesses are just as apparent and available to discuss. Many have picked apart the costume design and other historical inaccuracies, but the most obvious fact is that it lacks the overall gravitas that successful genre films achieve. Despite the vast backdrop, the central story seems oddly parochial, strangely restricted with the real lack of context weakening the dramatic impact. Action sequences can only generate constant excitement when there is the aforementioned context and it is here that Daniel Lee’s otherwise adequate efforts come unstuck. His work lacks that emotional injection that brings a human element to these lavish productions, despite attempting to crowbar a back story in for a few characters. His leading man also struggles with a role that needed two very different actors to play: Lau is good as the eager young soldier desperate to make his mark, but never convinces when asked to play the wiley war veteran.

‘Three Kingdoms: Resurrection Of The Dragon’ is a mixture of well shot conflict, stirring heroism and flawed drama. For the first half, the blend favours the former two virtues, but gradually loosens its grip and slips into bathetic spectacle – a real curate’s egg.