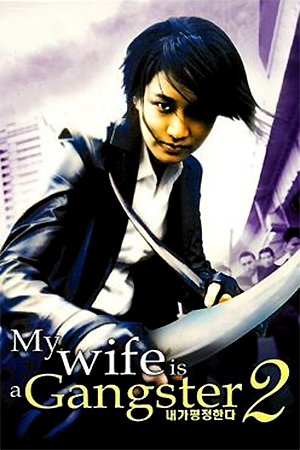 The first ‘My Wife Is A Gangster’ was a real hit and miss affair for me. While it certainly passed the time, it suffered badly from the director’s attempts to squeeze numerous genre elements into one movie.  After picking up this high profile sequel, I was slightly dubious that it would fall into the same traps. Thankfully though, I was pleasantly surprised…

As we catch up with gangster Eun Jin, she is deep in the thick of the action and still fighting for territory with rival gangs.  That is until she takes a nosedive off a building in the heat of battle and winds up in the middle of nowhere with a bad case of amnesia.  Luckily, she is taken in by a friendly restaurant owner who not only finds her useful in the kitchen but also begins to fall deeply in love with her.  However, Eun Jin becomes increasingly frustrated at not knowing how she acquired her skills so begins to try out all sorts of remedies (including electrocuting herself!) to regain her memories.  Unfortunately these all prove fruitless and it’s only when she uncovers her fighting skills that people begin to question what skeletons might be lurking in her closet.  Now the race is on for Eun Jin to recall her memories before her brutal past catches up with her.

Much like its predecessor, ‘My Wife Is A Gangster 2’ opens with a furious flash of action that instantly had me fearing the worst.  Thankfully though, this time around the sequence is far less eye catching and it doesn’t give the viewer a chance to be swayed into making unnecessary assumptions. So, once it’s finished it’s back to the business of formulating a basic but fun storyline and letting the comedy take precedence.  This firm establishment in one particular genre allows the film to notch up an instant improvement over the original and the fact that it never really takes itself too seriously is far more appealing.  The acting is also very pleasing and the jokes are silly enough to amuse even the most hardened critic, even if there is still a tendency to lean towards the bizarre melodramatic over-reactions. The only minor issue I had is the unexplained absence of Eun-Jin’s husband. Considering he was a pivotal element in the first film, it seems somewhat bizarre that his role in her life is never even touched upon.

When it came to action in the first film, I was pleasantly surprised at just how sophisticated it was and fairly disappointed that it didn’t play a larger part. While the second part downplays this element significantly, there are still a couple of fight sequences that are worthy of a mention. This time around, the choreography is less old school and more about wirework and quick-cut editing, meaning it’s nowhere near as exciting as it could of been. There are still a couple of flips and kicks that catch the eye, particularly during the finale, but on the whole it’s really nothing to get too excited about.  In a way though, I can’t complain as I think the first film’s action clearly set unrealistic expectations and I was pleased to see that this film focuses more on the comedy.

‘My Wife Is A Gangster 2’ may have lost the edge in the action department, but it’s definitely a more competent all-round effort. The film sports a much more easy-going and light-hearted approach with some comedy that really hits the mark.