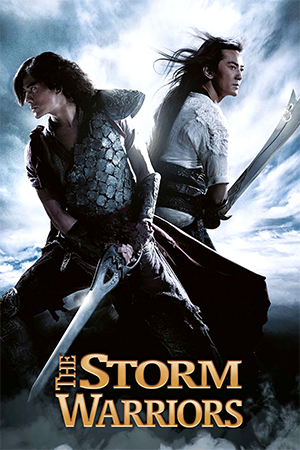 ‘The Storm Riders’ was the last film to sweep Hollywood competition aside when, in 1998, it marched to a fearsome $HK 40 million plus that gave a beleaguered industry some hope. Nevertheless, it was to prove to be a minor victory as big-budget imported cinema began to overwhelm its competition and leave local productions in tatters. Over a decade afterwards, we have ‘The Storm Warriors’ a sequel whose biggest surprise is the length of time it took to reach the screen, especially considering Hong Kong cinema’s usual ability to churn out a follow-up while the ink is still wet on the posters for the original.

Lord Godless (Simon Yam) is close to gaining complete control of the Chinese throne. His machinations have left the country’s best warriors incarcerated and all opposition helpless, with the ultimate goal of capturing an artefact to cement his monarchy within reach. The previously invincible team of Wind and Cloud are defeated by their foe, but manage to escape to plan their next stratagem. Wind is chosen to practice a dark art that threatens his very existence, yet could prove decisive against Lord Godless, while Cloud begins to develop new techniques taught to him by injured master Nameless.

Nothing seems to age a film as quickly as special effects and ‘The Storm Riders’ would now be difficult to appreciate with quite the awe it initially stirred in people. Importantly, ‘The Storm Warriors’ brings the technical side of the production confidently into the 21st century and in so doing shows how much computer trickery has moved on since the original. As with its predecessor though, this is filmmaking that offers a great deal visually but never troubles our feelings of humanity. While there’s enough sparkle on the screen to distract us for the first hour, this fact begins to nag away at the overall work. Eventually, this builds into a loud and brash action film that has the emotional depth of a video game intro-scene.

What the Pang Brothers do bring to the genre is an arresting visual style that is admirable for the first half. The film uses clever animated inserts that give ‘The Storm Warriors’ a vivacious edge while the sharp cinematography succeeds in stamping the directors’ identity all over the work, a bold statement that this vision is not reliant on the original. Without doubt this is the productions greatest asset and while it continues to surprise, it keeps our interest ticking along nicely.

As the style inevitably overpowers the substance, the facade of a plot begins to break apart and the husk of a film is left. There’s such a build up to the rematch between Wind, Cloud and Lord Godless and his conniving son that it promises quite an anti-climax when it finally arrives. The opening ten minutes of ‘The Storm Warriors’ provides as great a spectacle as the long-awaited confrontation which is therefore a bit of a damp squib among the cinematic pyrotechnics. Lord Godless is something of a red herring though as the Pang Brothers eventually show their intentions with a finale that pits Cloud against the now psychotic Wind. So little depth has been invested in the characters that there is nothing to stir the emotions in what should be a scenes ripe with tension.

While Hong Kong audiences have fallen in love with the Potemkin villages erected by Hollywood, it may be re-assuring to see that Asian cinema has its own line in hollow blockbusters. Unfortunately the imagination that once set local films apart from their rivals is lacking and though ‘The Storm Warriors’ can be appreciated for its visual flamboyance, it hasn’t got anything else of interest when this finally loses its edge.