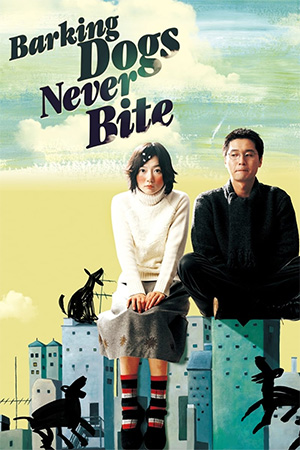 Frustrated unemployed lecturer Yun-Ju is slowly drive mad by a multitude of infuriating factors that eat away at his brittle patience. Firstly there is his inability to provide for his pregnant wife: the thought of bribing his way into a college position begins to cross his mind after colleagues suggest it. Secondly, and perhaps more pertinently, there is the cacophonous racket generated by the dogs in his apartment block. Taking drastic action as regards the latter problem, Yun-Ju kidnaps one of the canine perpetrators and locks it in a cupboard while he decides his next move. When he discovers that the nuisance he rid himself of was actually innocent, he rushes away to free it only to find that it has met a grisly fate at the hands of the the dog-meat loving caretaker. His conscience starts to troubles him, the barking mutts continue to drive him to distraction and his wife begins to lose patience with his indolence.

Bong Joon-Ho’s ‘Barking Dogs Never Bite’ is acclaimed as a acerbic satire on Korean society, but in truth it rarely lives up to its few genuine moments of promise. It’s targets are hazy, perhaps over reliant on specific cultural targets that fail to travel beyond Korea. The only idea that resonates is how much a few characters enjoy feasting on dog meat, hardly a revelation that will challenge stereotypes of Korean cuisine.

‘Barking Dogs Never Bite’ juxtaposes a couple of themes that later emerge as the spine of Bong Joon-Ho’s work. The persistent critique of the single-minded, ambition-above-all-else ethos that the director sees as the prevalent ideology within Korean society. The digs at the capitalist juggernaut start early with characters quite willing to descend to corruption to get up the first rung of the social ladder. Such behaviour is used by the director as an indication of what lies underneath the veneer of respectability that the main characters aspire to.

Despite his attempts to look beneath the surface of Korea, Bong Joon-Ho is unable to sink his teeth into anything too substantial though. The aforementioned satirical look at Yun-Ju’s professional situation fails to register enough incision to make it a successful attack on an endemic problem. Yun-Ju is also too bland a character to make any impression; any sympathy for his situation or for the plight of the common man is hard to muster for such a one-dimensional character. Such a flaw means the very kernel of the story is hard to be involved in.

Bong Joon-Ho certainly features a few moments of pitch black comedy though they are too absurd to offend. The battles between Yun-Ju, the barking hordes and the female avenger are pleasingly surreal, showing a dream-like visual flair that is typically Asian. Such facets mean that ‘Barking Dogs Never Bite’ is certainly not a waste of time and the excellent Ba Du-Na helps lift whatever scene she appears in. Nevertheless, the film drags on without direction and, by the final quarter, begins to outstay its welcome.