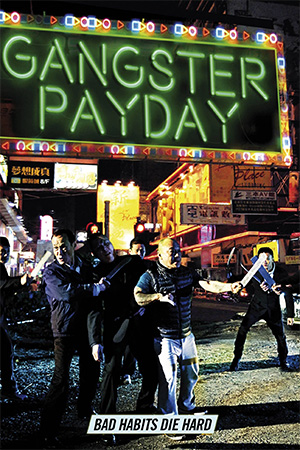 Weary Triad boss Ghost (Wong) runs a modest Hong Kong nightclub and seeks a life away from the underworld. The criminal scene is changing though and rivals are buying up valuable real estate while Ghost contemplates opening a teahouse with his most loyal followers. An accident brings him into contact with cute and feisty teahouse owner Mei (Cheung) who is herself struggling to keep her business going in the light of the changing tastes of the public.

The two become unlikely friends, even unlikelier business partners and the reformed criminal begins to take a real shine to his much younger partner. Unfortunately she is more interested in Ghost’s faithful deputy Leung (Wong You Nam) though the feelings that develop remain unsaid. Perspective is brought to the situation though when ambitious triad boss Bill begins plans to take over Ghost’s territory and is not averse to using intimidation to get his way.

‘Gangster Payday’ is a shot of unashamed nostalgia and intentionally so. The plot recalls so many of those old crime thrillers of the 80s, the cast is full of veteran spice (Chan Wai Man in particular) and even the way the storyline is executed will twinge the memories of that golden era of Hong Kong cinematic output. Now the industry is merely a trickle, it’s a poignant reminder if not exactly fresh or new. It’s a film that relies a lot on the charm of its stars as the plot is predictable, but it finds great strength in drawing on performers as good as Anthony Wong, Carrie Ng and the rest of a cast that mixes youth with experience to fine effect.

For the most part this is a perfectly enjoyable though undistinguished drama, but things step up a gear near the end. This helps frame the other beautiful mundanities of the characters. There’s also a subtle melancholy here that gives the film a bit more depth, a kind of Hong Kong ennui that contemplates mortality, redemption and the changing world around the performers; this is where ‘Gangster Payday’ enjoys some extra resonance and earns the production an added half star.