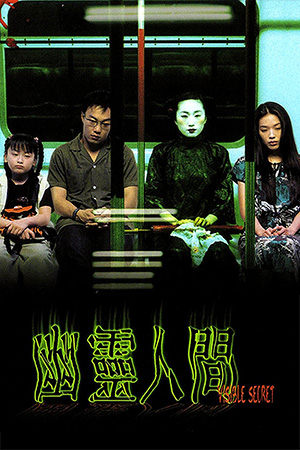 Ann Hui, the critical darling who has successfully managed to blend popular and personal filmmaking, returned to the horror genre for the first time since ‘The Spooky Gang’ (1980) with this offbeat, darkly comic romantic chiller.

Indebted to ‘The Sixth Sense’ it may be, but ‘Visible Secret’ eschews the surreal shocks of current Japanese and Korean horror cinema, being a more traditional ghost story boasting such genre favourites as animated headless corpses and deep-voiced possessions.  Bravely, scriptwriter/producer Abe Kwang keeps the spectres offscreen for much of the running time, choosing a stately pace that allows character and a carefully sustained sense of trepidation to develop.

“Peter” Wong Choi (Chan) is a talentless hairstylist beset with financial difficulties and an elderly father suffering from mental problems.  In to Peter’s life comes June (Shu), a whirlwind of unhinged energy who beds him on the first date and with whom he begins a touching relationship.  June also insists she can see ghosts through her left eye, and although initially sceptical, Peter begins to witness inexplicable cases of possession that hint of a dark secret close to him.

Hui’s low-key direction is assisted by cinematographer Arthur (‘Once Upon A Time In China’, ‘New Dragon Gate Inn’) Wong’s chilling blue visual style and the deep reds he uses to suggest the supernatural (again cribbed from ‘The Sixth Sense’).  Wong would go onto win a Hong Kong Film Award for his work here, while the Hong Kong Film Critics Society would also honour both Hui and the film.

The unglamorous Chan and the kooky, ever-rising Shu ably carry the emotion of the film, which traverses a range of genres, from ghost story through romcom to familial drama.  But, Hui allows ample time for the supporting players to flesh out their characters, and is rewarded with memorable turns from Wong and Lee as Peter’s father and best friend respectively.  A trend in many Hong Kong movies, ‘Visible Secret’ features an assortment of star cameos, most notably the irascible Anthony Wong who gives the film its biggest shock.

The relaxed pace and focus on social problems (Chan is financially and professionally a failure) will frustrate audiences expecting an ‘Evil Dead’ inspired frightfest or ‘Ring’ style thrills, but for those willing to follow horror down different avenues ‘Visible Secret’ offers its own surprises.  The central relationship is affecting, and is matched by finely handled scenes between Peter and his ailing father.  Plus, Hui and Kwang deliver the ghostly goods with a handful of skilfully handled possession scenes, incorporating unnerving wirework and inventive digital effects.

Only a pedestrian resolution of the central mystery and a confused final twist sour the enjoyment, but ‘Visible Secret’ is an old-fashioned suspenser expertly told by a director criminally under-recognized in the West.

As a bizarre side-note, ‘Visible Secret’s advertising campaign, a ghostly woman (Jo Kuk) riding the subway along with the principal players, was pulled after it drew complaints from subway commuters.  Taking the apology too far, a scene featuring the apparition on the subway was also deleted, robbing the film of an arresting image that was retained in the teaser and theatrical trailers.