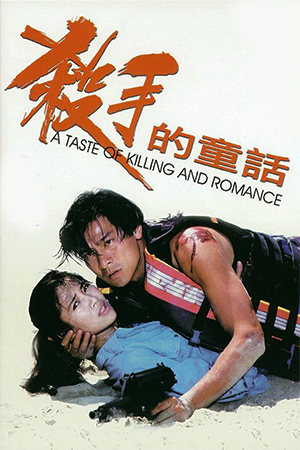 Ko Sau (Lau) is the finest assassin for hire and is currently employed by a crime syndicate who use him for all of their dirty work.  This is pretty easy money for Ko as jobs come thick and fast and the syndicate has only one rule – if you fail to kill your target then you become the target.  It would seem everything is perfect, at least that is until female assassin Ru Fung (Yuen) appears on the scene.  Not only does she become serious competition for Ko in the job market but she is also extremely attractive and the two soon become romantically involved.  In these sorts of situations though, relationships can cause complications and things go horribly wrong when Ko misses his next target due to distractions in his personal life.  This forces the syndicate to send an assassin after him and there’s no prizes for guessing who that is!

‘A Taste Of Killing And Romance’ plays out like an homage to John Woo, from the anti-hero storyline and heroic bloodshed action right down to a couple of scenes that are just a touch too over familiar.  Sadly though, the film lacks both the emotional intensity and depth found in Woo’s works, and instead winds up being just another bland action flick. While the concept of opposing assassins falling in love is an interesting one, this idea never feels suitably fleshed out. The two main characters are extremely one dimensional and bland, and the romance seems rushed just so that the film can jump ahead to the action. This might be okay if the shoot outs were something special, but sadly they are poorly choreographed and edited so they fail to leave a lasting impression.

‘A Taste Of Killing And Romance’ may do enough to pass the time if you’re a fan of any of the actors involved but it’s certainly far from anyone’s finest work. At the end of the day, it just feels like another cheap clone that really isn’t all that worthy of the time investment.