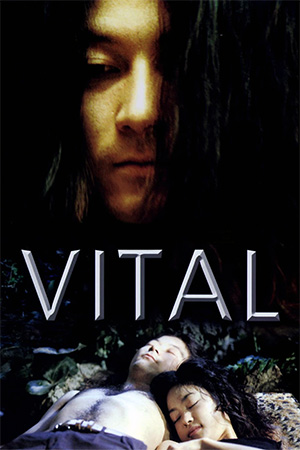 Since his wild, flesh-and-metal fusing debut ‘Tetsuo’, Shinya Tsukamoto has matured into a more considered but still daring filmmaker.  His last three films, ‘Gemini’, ‘A Snake of June’ and now ‘Vital’ retain themes of alienation, entrapment and anarchic freedom, but the tempo is more stately and the films offer more than censor-baiting viscera.

After a car crash that killed his girlfriend, Hiroshi (a baby-faced Asano) is left with amnesia, and attempts to recreate his old life as a medical student to regain his memories.  In a cruel twist, the cadaver he has to dissect is Ryoko, his girlfriend (Tsukamoto – no relation to the director).  Investigating the secrets of her body provides clues to his past, but can Hiroshi decipher between fact and wish-fulfilment, and will his guilt at beginning a disturbing love affair with fellow student Ikumi finally destroy him?

An emotionally potent piece of work, ‘Vital’ tells a fractured, engaging story of obsessive love and controlled anguish, skilfully mixing past and present.   Graphic dissection is there for the gorehounds, but this is a radical romance.  Hiroshi’s love for Ryoko is manifested in his obsessive dissection of her body and idealized daydreams, while his relationship with Ikumi, who harbours a death wish, is consummated through mutual strangulation.

If ‘Gemini’ was a re-versioning of Tsukamoto’s earlier ‘Tokyo Fist’, ‘Vital’ is a similar re-working of ‘A Snake of June’.  What happens next is an exciting and frightening question.