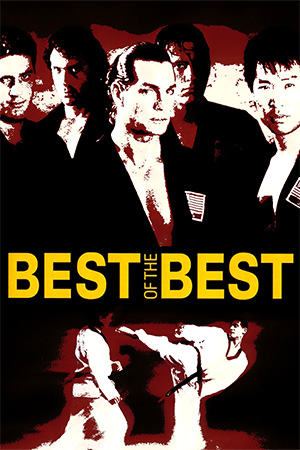 The 1980s was a great decade for Hollywood action movies, giving us genre-defining classics like ‘Die Hard’, ‘Lethal Weapon’, ‘Rambo’ and ‘Commando’. Due to this rise in popularity, the B-movie industry followed suit and actors such as Jean-Claude Van Damme and Steven Seagal flourished in straight to video alternatives. ‘Best Of The Best’ is one such low budget example that regularly seems to be overlooked, even though it remains a fan favourite that is often cited for its influence on American martial arts films. Well, worry no more because I’m about to set the record straight…

Alexander Grady (Roberts), a widower and father of a five-year-old son, is chosen to represent the United States of America in an international Taekwondo tournament against Team Korea. Also chosen for the team is Tommy Lee (Rhee), a man seeking revenge against a member of Team Korea for the death of his brother; Travis Brickley (Penn), an extremely brash fighter with a short fuse; Virgil Keller, a devout Buddhist; and Sonny Grasso, a streetwise fighter from Detroit. Coached by Frank Couzo (Jones) and Catherine Wade (Kirkland), the Americans will have to prepare themselves to meet an unstoppable group of Korean martial arts experts, but not before they have faced their own personal conflicts and tragedies.

Okay, so admittedly the plot for ‘Best Of The Best’ isn’t exactly all that original and you could say it follows the standard ‘Rocky’ underdog formula, but that certainly doesn’t equate to a bad movie. For starters, it executes the scenario exceptionally well, with main characters that each display distinctive personality traits (good and bad) and must endure real-life problems. The story also deviates slightly from the standard route and even though it has its fair share of clichéd dialogue, does occasionally manage to tug at the heartstrings. Director Robert Radler also helps to inject some quality into the proceedings as he effectively handles Alex’s relationship with his son and makes good use of flashbacks for Tommy’s sad back story. Don’t get me wrong though, this isn’t exactly the pinnacle of filmmaking and does still ooze huge amounts of cheese, but it’s the fun kind of cheese that ‘Team America’ poked fun at, such as training montages and long contemplative bike rides in the mountains.

Of course, a film such as this wouldn’t work quite so well if the cast weren’t up to the challenge, but thankfully the majority of them do a decent job. Eric Roberts and Phillip Rhee are probably what you would call the main stars and each of them certainly pulls off their respective roles with some aplomb. Rhee, who later went on to become the main focus of the series, is probably the more muted of the two here as he bottles up his emotions until the finale. However, this works in his favour and I think his outburst at the end is definitely one of the film’s emotional highlights. Roberts on the other hand wears his heart on his sleeve throughout and you can’t help but feel for him as he is forced to choose between the team and his son. James Earl Jones rounds out the cast nicely as the team coach while the late Chris Penn slots perfectly into the role of the arrogant ass.

Last but by no means least, we have to take a look at the all-important aspect of the action, which is pivotal for a film in this genre. Now the first thing that I feel obliged to point out is that prior to production, only Rhee and (shockingly) Penn had had any previous martial arts training so you have to cut the rest of the performers some slack. That said though, with the clever use of doubles and some sneaky camera angles, the majority of the action scenes do actually work quite well. However, there is no substitution for the real thing and it’s when Rhee is in action that the film truly shines. His closing bout with his real-life brother, Simon Rhee is superb and contains some extremely impressive kicking combinations. Of course, I still wouldn’t put it anywhere near Hong Kong standards, but I think it’s probably one of the best American examples and it amazes me that Rhee never received the proper recognition.

It may be classified as a B-movie, but ‘Best Of The Best’ will always be an A movie in my eyes. With a fine set of leading actors, decent fight scenes and some hugely entertaining clichés, it’s a film that always entertains and definitely deserves to be viewed by all action movie fans.