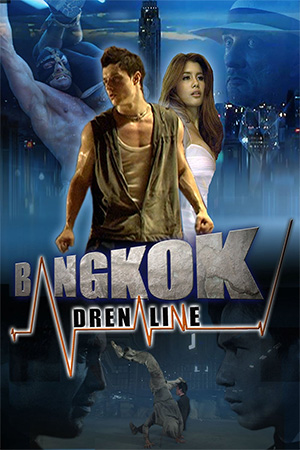 When four backpackers hit Thailand for a few wild nights of partying, the drink flows quickly and the money flows even quicker. Before they know it, they are low on funds so they decide to try their hand at a gambling game to win some easy cash. Unfortunately, it turns out to be tougher than it looks and they end up in serious debt with a bigtime gangster. In a desperate attempt to repay the money, they come up with a ridiculous scheme to kidnap a billionaire’s daughter so that they can ransom her off. The plan backfires though when it turns out that her father also wants her dead and sends an army of henchmen to wipe out the lot of them.

If you’re watching ‘Bangkok Adrenaline’ with the vague hope of finding any kind of story or acting merits, then I’d probably say you’re in for a huge disappointment. Shot on a shoestring budget, the film flaunts an utterly ridiculous plotline and features four very amateur “farangs” trying their hand at this thing called acting. Sadly, this distinctly disappointing concoction makes the production feel as cheap as it actually is, with the inclusion of some very weak Guy Ritchie homages (most notably the gambling scene) and static English dialogue delivery only adding insult to injury. Thankfully there are a few minor distractions in the form of the beautiful Priya Suandokemai and the odd injection of childish humour, but even these can do little to save what is clearly a very weak effort.

Of course I highly doubt that anyone who picks up ‘Bangkok Adrenaline’ will be expecting ‘Citizen Kane’, and the majority of us just came here for the action. I’m pleased to say that in this department it fairs considerably better, and occasionally even goes above and beyond. The main talent on display is Daniel O’Neill, a baby-faced Brit who makes the step-up from stuntman to action hero. Although he may not be much of an actor, some of his acrobatic feats and kicking skills are absolutely amazing, and the combinations he exhibits in the finale are right up there with the big boys. Alongside him is Gwion Jacob Miles, another impressive fighter who, despite being kept in the background for several of the major fights, does look equally adept at the action. Sadly, the film does occasionally falter by throwing in some dizzying camera angles or pointless comedy, but I think it’s fair to say that majority of the action is spot on and everyone involved has done a damn fine job.

While it may leave a lot to be desired in terms of cinematic competence, ‘Bangkok Adrenaline’ emerges as a fun little ride thanks to the inclusion of several hard hitting action highlights. If you’ve been suffering from withdrawal symptoms since you saw ‘Ong Bak’, then this is a fine footnote that pushes a lot of the same buttons.