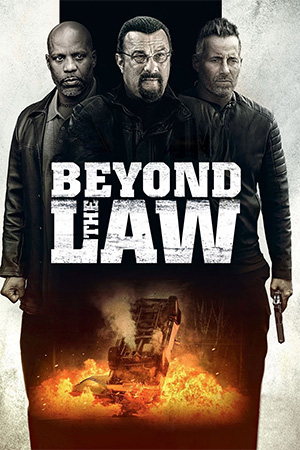 Frank Wilson (Messner) is an ex-cop with a sordid past. When he is visited by Detective Munce (DMX), he learns that his only son has been murdered. This forces Frank to come out of retirement as he vows to bring the killer to justice. But the father of the killer is a former gangster turned respected businessman (Seagal) and he is willing to do whatever it takes to protect his own son. This sets the two men on a collision course that can only end when one them is dead.

Summing up the plot for ‘Beyond the Law’ makes it sound like a fairly promising low budget revenge flick. After all, it contains a number of favourable ingredients: the former-cop looking to administer his own brand of justice, a cocky bad guy down for the fight, and a big boss waiting in the shadows for the finale. Unfortunately though, the film itself is far less appealing than it sounds. Once they’ve established the very simple setup, most of the running time is wasted on one scene after another of gruff-sounding men mumbling angrily at each other. There is of course the odd “emotional” flashback and a predictable double cross, but the shoddy script and lack of character development means we ultimately couldn’t care less about the outcome. As for the acting, Messner is fine but forgettable while the likes of DMX and Seagal lazily stumble through all of their lines. The only real saving grace is veteran actor Bill Cobbs who does his best even though the material regularly lets him down.

Of course, movies like this can still prove to be entertaining if they contain some solid action but sadly that isn’t the case with ‘Beyond the Law’. Judging by all of the quick cuts and attempted takedowns, it seems as though they were hoping to reproduce a ‘Taken’ style of action. If so, they failed miserably. The few fights on offer are incredibly simplistic and dull, with no sign of any kind of choreography. Most of the time Messner just throws a few basic punches or thumps someone with a blunt implement before it’s all over. The shootouts are just as bland, doing barely enough to maintain your interest in what are supposedly the best bits. And then there’s the final showdown which may well be one of the most unintentionally hilarious scenes ever made. The two men simply bump up against each other and Messner goes flying, presumably because he is completely overwhelmed by Seagal’s sheer presence.

‘Beyond The Law’ is a slight step up from some of Seagal’s other recent outings, but that isn’t exactly saying much. It’s still a poor attempt at a revenge flick that is sorely lacking in action and regularly feels like a chore to sit through. Really not worth the time.