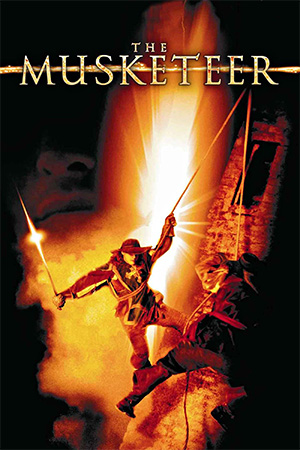 When his parents are killed by Cardinal Richelieu’s ruthless follower Febre (Roth), young D’Artagnan (Chambers) vows to get revenge. However, he decides that he must first honour the family name by becoming a Musketeer. After several years of training, D’Artagnan travels to Paris to apply but finds that the Musketeers have been suspended as part of Cardinal Richelieu’s devilish plan to instigate war between France and England.  Now it’s up to the skilful young swordsman to reunite the Musketeers so that they can put a stop to the evil Cardinal’s schemes.

As you can probably already tell from the title, ‘The Musketeer’ is a reworking of Alexandre Dumas’s classic novel ‘The Three Musketeers’. Unfortunately though, it’s not a particularly good one and the film is absolutely plagued with issues. The little story that is on offer is just a bland and predictable revenge scenario that is played out using some absolutely horrible dialogue. Most of the genuine acting talent, such as Roth and Deneuve, are confined to cameos that are made all the worse by the bizarre variety of accents. However, all of these problems pale in comparison to the hideous performance from leading man Justin Chambers. Aside from the fact that he looks totally out of place in the period setting, Chambers is a terrible actor who is utterly wooden throughout. This is never more obvious than in the film’s pivotal love story, which will have you fighting back the urge to vomit as he poorly recites his already cringe-worthy lines.

Surprisingly, ‘The Musketeer’ features action choreography by none other than Xiong Xin-Xin. While I’m not convinced that the Asian influence suits the setting, there is no denying that the action sequences are the film’s one bright spot. Xin-Xin dishes up a number of epic acrobatic encounters that see our (heavily doubled) hero bouncing from all corners to beat his opponents. It’s also evident that Xin-Xin has drawn inspiration from his time on the ‘Once Upon A Time In China’ franchise and he even includes a very obvious homage in the finale involving ladders. Now before you rush out to pick up a copy for this reason alone, I must point out that there is one huge problem that spoils the majority of Xin-Xin’s hard work. Presumably to hide the obvious doubling, Hyams chooses to set most of the action scenes in poorly lit areas and this renders them practically unwatchable. It’s a truly bizarre approach and one that really frustrates throughout.

‘The Musketeer’ is a horrible re-interpretation of Dumas’s classic tale that will most likely have him turning in his grave. Hyams really dropped the ball on this one and even Xin-Xin’s nifty fight choreography can do little to prevent it from being a total bomb.