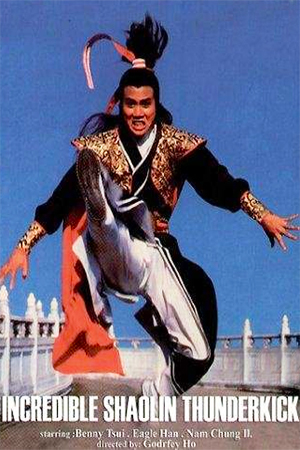 What’s that sound kids? It’s the bottom of the barrel being scraped! Yes, when it comes to good old fashioned keg scratching, few can compare to independent film-maker Godfrey Ho. He probably wrote the book on inept martial arts cheapies, then directed the film of said book (ineptly) and finally ripped-off his own work forever more with weaker imitations.

Benny Tsui, a star solely lacking in charm despite some physical skills, is the bumbling water-carrier hero, bullied by local heavies and desperate to learn kung-fu. Enter a grey-haired tramp (who may be at the bottom of the social ladder, but still has quite a nice little house with a well-tended garden) who teaches the young victim his skills enabling him to avenge himself on the gang. Although he beats them soundly, villainous Eagle Han is a very different proposition.

‘Incredible Shaolin Thunderkick’ is ineptitude on an almost apocalyptic level. Godfrey Ho’s ability to combine dire, dire comedy, cheap sets, gaudy costumes and a plot that is delivered with all the skill of a brain-damaged ape trying to wire a plug is well highlighted with this miserable kung-fu flick.

Two things offer a slither of redemption, only one of which is intentional. The first – and obviously the more admirable of the two – is a few tidy fight scenes, though these require the viewer to sit through a juggernaut of massively unfunny scenes before they can see them. The second grace is the dubious entertainment that can be derived from listening to some of the worst dubbing ever to be used for a kung-fu film. The world’s professional cockney caricature actors association is kept well employed by ‘Incredible Shaolin Thunderkick’s casting, given ample opportunity to give their Oriental characters the most hammy East End accents you could imagine. Woeful.