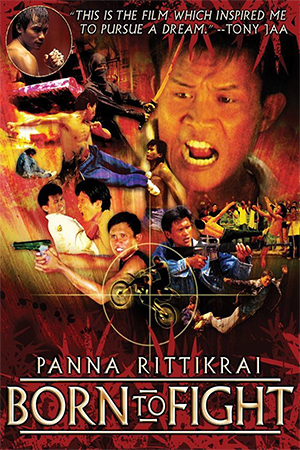 When the lawyer of a Hong Kong syndicate stumbles upon some incriminating papers, he becomes the target of a vicious gang known as the Green Dragons. In an effort to escape them, he travels deep into the heart of the country where he hopes to lay low with some family. When the police get wind of this, they decide to call upon an ex-cop and martial arts expert (Rittikrai) to locate the lawyer and escort him back to testify. Unfortunately, it would appear that the Green Dragons already know his location so now the race is on to see who can get to the lawyer first.

Aside from the involvement of Panna Rittikrai and a couple of similar stunts, it’s fair to say that this original version of ‘Born To Fight’ actually has very little in common with the 2004 remake. It does however bear a very strong resemblance to ‘Ong Bak’ and I would go so far as to say that the story is almost an exact blueprint for the Tony Jaa smash hit. This is particularly evident when you look at the path of the hero, which takes him out of his country lifestyle to track down someone or something before eventually being forced to fend off a group of bad guys. Similarly, the characters that surround him are carbon copies of ‘Ong Bak’, such as the tomboyish leading lady and a very annoying “comedic” sidekick who always gets in the way. Unfortunately, this comparison also stretches into the film’s main fault as the plot is often far too simplistic to maintain your attention between action sequences, and the fact that this production is cheap and littered with amateur actors doesn’t do it any favours.

Now that that’s out the way though, I think we all know that this film is really about the action and in this department it certainly delivers. Essentially, what we have here is the evolution of Rittikrai as he opens the film with a number of homages to the classic kung fu films of yesteryear (look out for some snake fist and drunken boxing), before he eventually finds his own unique style of hard hitting, realistic action. Although it’s still quite raw at this stage, it’s the realism that really makes the film shine as the stuntmen perform some amazing physical feats and it’s always evident that you are witnessing the start of something special. It’s also interesting to see how well Rittikrai does as a leading performer as he is clearly a very talented martial artist, so much so that one wonders if he would give Tony Jaa a run for his money if he were still in front of the camera today.

While ‘Born To Fight’ may not be the slickest production, it is still a hell of a lot of fun to watch thanks to the presence of some top-notch fight scenes. Even at this early stage, it was obvious that Rittikrai had a great eye for action and you can clearly see that this was a master in the making.