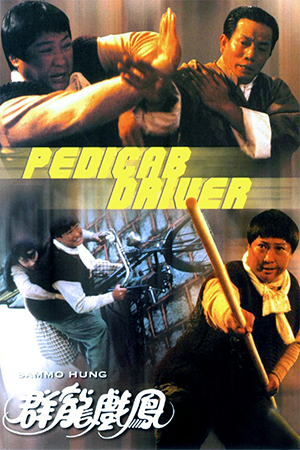 Set in 1930’s Macao, Sammo plays Tung as the title role of a pedicab driver (the taxi’s of the day!). The story seamlessly combines comedy, tragedy and superbly choreographed Kung Fu.

When Sammo inadvertently stops a powerful whorehouse owner (John Shum) from harassing a female worker (Ping) from his aunt’s bakery, he is chased by thugs only to eventually evade them by crashing through the window of a gambling house owned by the legendary Liu Chia Liang. Tung fights Liu in order to get back money dropped by Ping when they flew in. The fistfight that follows combines great power, pace and one-liners, and would be a worthy main fight in many films. However, the two shortly go at each other with poles with Sammo in particular showing some superb acrobatics, before being defeated! Liu returns his money as a sign of respect allowing Sammo and Ping to leave.

The film quickly becomes more dramatic following Sammo’s fellow driver Malted Candy (Mok Siu Chung) deciding to marry his girlfriend, only to discover she is one of Shum’s prostitutes. As a result, Shum has them both killed setting the scene for Sammo to enact his revenge. The final reel is raw power and energy as Sammo takes on a small army of goons before meeting his match in Billy Chow (‘Dragons Forever’, ‘Eastern Condors’).

This is easily one of Hong Kong’s finest films and a must have for anyone interested in the genre.