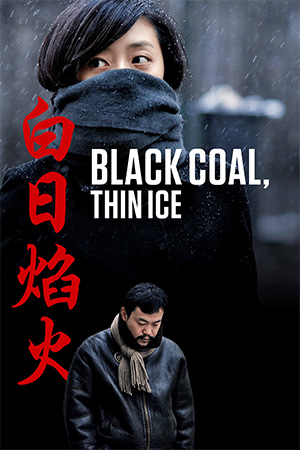 When a brutal murder is discovered, detective Zhang Zili assigned to the case. The investigation, however, is botched and Zili is left as the scapegoat, forced to quit the force and slides into alcoholism. Five years pass and Zhang is now a security guard haunted by the case that caused his downfall so when another killing fitting the same m.o. Occurs, he involves himself in the mystery. Keen to redeem himself, the disgraced ex-cop follows clues back to a stoic, but attractive female worker at a local dry cleaning shop. Yet as he is drawn deeper into the mix he begins to develop feelings for her and finds his judgements under threat.

Lauded as a modern Chinese film noir, ‘Black Coal, Thin Ice’ isn’t nearly so easy to place in the sub-genre that the hype has forced it in. Perhaps it is the image of the archetypal film noirs of the 40s and 50s and even the modern attempts that distance one from making a neat comparison to Diao Yi Nan’s film. There is a crime, a nihilistic tone and – and this is stretching the term quite a bit – a femme fatale, but this is as much Chinese realism cinema as it is crime thriller. Appreciating it as such might help manage expectations.

For a bleak tone and grim setting, ‘Black Coal, Thin Ice’ is hard to beat. The location of Heinlongjang is perhaps the productions greatest asset and most involving character. It’s that mix of wintery half light, frozen roads, characters in thick coats and fur headgear and industrial grit that gives the film such resonance; it’s the kind of place that must be hell to film in, but looks so powerful on screen and sets is apart from the glossy, breezy city based flicks that tend to be the norm in Chinese cinema these days. This is as much a contrast to those areas that are keen to indoctrinate aspiration and money as you can get and shows the outstanding variety of landscapes open to film-makers in such a vast and varied country.

Of course style is one thing that doesn’t necessarily equate to an involving experience and this is what lets ‘Black Coal, Thin Ice’ down considerably. It is a real skill to combine such a powerful tone with characters and story that draw the viewer in and despite its plaudits, this film falls down in this important area. It isn’t just Heinlongjang that’s icy and unaccomodating – the people that inhabit this world are as inviting as a mantrap at the bottom of a children’s helter-skelter. That is the common artistic prerogative of distancing the audience from what is happening in the story and the director can consider this a big achievement if that was his aim.

‘Black Coal, Thin Ice’ is one of those films that are encountered once in a while that are much easier to admire than feel warm and fuzzy about. Those old classic film noirs had the balance just right and their mixture of anti-heroes and villains had enough motivation to make even the bleakest storyline intriguing. ‘Black Coal, Thin Ice’ doesn’t try and after two hours of mildly diverting misery, it’s easy to conclude that this is an exercise in aesthetics rather than an attempt to entertain.