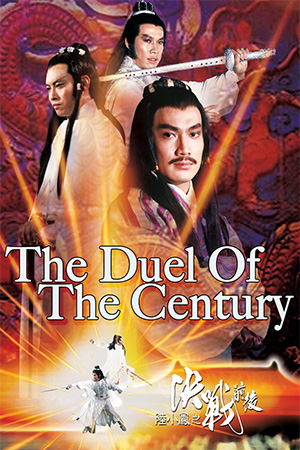 After impressively fleshing out the Gu Long character of Lu Xiaofeng in ‘Clan Of Amazons’, Lau Wing returns for this follow-up which once again throws the debonair protagonist into the intrigue-filled martial world. Later filmed as the CGI-filled ‘The Duel’, this is the swordplay genre at its most alienating.

A duel has been arranged between the two most formidable combatants of the martial world: Shimen Chui-Shiue (Yueh Hua), master of the ‘Wavering Sword’ style and the reclusive exponent of the ‘Floating Goddess’ technique, Ye Gu-Cheng (Jason Pai Piao). While the duel is creating tremendous interest in the betting world, there also seems to be a plethora of nefarious characters who also getting involved in the much-publicised event. Into this complicated series of events steps self-confident hero Lu Xiaofeng who is well known for his intelligence and blade-catching skills. Lu meets the two participants, but is baffled as to who and why such a duel was originally organised. When Lu’s investigations begin to uncover a few hidden conspiracies his life is threatened by the various unusual assassins who are well known in the cut-throat martial world. Though Lu manages to survive these attempts, the mastermind behind the intrigue is expertly concealed and Shimen and Ge find themselves under suspicion despite their pleas of innocence.

‘The Duel Of The Century’ is a tangled web of motives and elaborate swordplay action, all within the exotic world created by Gu Long and perfectly-harnessed by Chor Yuen. Though such a judgement sounds like it could apply to all of Chor Yuen’s collaborations with Gu Long, the result here is far less satisfying than it should be. By 1981, it seemed as if Chor Yuen was gradually in decline after his late-70s zenith and ‘The Duel Of The Century’ is a perfect example of how this manifested itself. Of course the martial world as penned by Gu Long is, by its nature, convoluted, but previous efforts to bring it to the screen were often far more able to balance the necessities of the narrative with the characters and the action.

Comparing this maddening mess to the hugely enjoyable ‘Clan Of Amazons’ really shows up the deficiencies of this sequel. Though the former had a storyline full of double-crosses and clandestine plotting, it was never the overall focus and the other facets of the film therefore did not suffer. ‘The Duel Of The Century’ throws one eccentric after another into the story and never manages to develop any genuine sense of tension. Every subsequent scene then begins to resemble the last: Lu arrives at the scene, is faced with some noted assassin who he easily dispatches, then he rushes to find out who hired the said killer only to go through the process all over again. As many of the background characters are merely a means to an end, it is difficult to feel involved when yet another villain cackles a threat at our hero. By the time the great revelation takes place, interest is definitely on the wane.

When ‘The Duel Of The Century’ reverts to its main purpose – to entertain with well choreographed duels – it again falls short of much of Chor Yuen’s past work. The tone of the fights is tired and repetitive with the extras beginning to sleepwalk through the moves by the films end. Though there is a fine clash between Lu, Shimen and a fire-spouting clan, it merely acts as a reminder of the tedium inherent within the rest of the action. This, along with the tiresome crosses and double-crosses, is what will undoubtedly dissuade most seasoned viewers from watching this.

The saving grace of ‘The Duel Of The Century’ is again the character of Lu Xiaofeng. With enough arrogance to make Jose Mourinho blush, Lu smirks, mocks his opponents’ intelligence and never loses his cool despite the increasingly outlandish attempts on his life. It is quickly understood that Lu is at least two steps ahead of any of the dastardly villains who cross his path; though even this is in danger of becoming tired, such an invulnerable and sly hero is a real breath of fresh air in the clichéd genre. Lau Wing may not be an accomplished screen fighter, but it is his portrayal of Lu Xiaofeng that earns this a moderate rating that it otherwise would not deserve. Three stars though only a marginal recommendation.