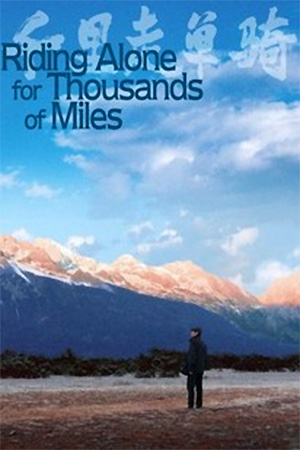 It must have been slightly galling for long-time Zhang Yimou devotees to see their beloved director championed by some critics after the worldwide success of ‘Hero’ and ‘House Of The Flying Daggers’ while previously lauded films appeared to be swept under the carpet. Thankfully for them – and those of us who were looking forward to seeing a more intimate kind of work from the great Chinese artisan – he has returned to the pastoral with ‘Riding Alone For Thousands Of Miles’.

This paean to rural China is told from the perspective of Gouichi Takata, a Japanese man desperate to be reconciled with his estranged, terminally-ill son. Despite his trip to Tokyo to be by his son’s side, Gouichi is refused access and has to rely on his daughter-in-law for regular updates as to his condition. When Gouichi discovers that his son was working on a documentary about a Chinese Opera singer, but was unable to complete it due to his encroaching ill health, he elects to devote his time to completing the task. He travels to China to find the singer and finish the documentary, hoping the act will finally thaw relations between him and his son. The task is complicated when Gouichi discovers that the focus of the documentary is now serving a jail sentence and attempts to reach him are stifled by bureaucracy. As the prospective film-maker tries to get past the red tape he gets to know a variety of local characters, foremost among these is a lonely boy whose father is also serving time at the state’s pleasure.

Zhang Yimou returns to the gently-paced, beautifully-shot stories that initially placed him onto the world stage, while also providing a keen insight into a land that was, until recently, shrouded in mystery and mythology. ‘Riding Alone For Thousands Of Miles’ takes viewers on a similar journey to much of Yimou’s earlier works, the protagonist searching for answers and closure in the vast landscapes of China. Not that the familiarity with the concept is necessarily detrimental; Yimou is such an assured film-maker that his development of the material has all the hallmarks of quality one expects from an auteur. The story is developed with the languid confidence that Yimou displayed in works such as ‘The Road Home’ and ‘Not One Less’, utilising a pseudo-documentary intimacy to explore the subject matter.

Yet, despite the fact that this is a ‘comfortable’ viewing experience, it fails to be the return to past form that was expected. While there’s much to savour and the execution of the material is hard to fault, it never manages to have the emotional core that made earlier works benefited from. Although we grow closer to Gouichi throughout the story – certainly closer than to the characters from ‘Hero’ and ‘House Of The Flying Daggers’ – the obvious turmoil he’s suffering fails to resonate as it should. The peerless Ken Takakura cannot be faulted as he conveys more pain and contemplation in a few silent moments than the whole script can muster throughout. Rather it is the lack of development behind the central dynamic – why the father and son have become so bitterly divided is never explained nor even hinted at, leaving us with significant ground to make up throughout.

‘Riding Alone For Thousands Of Miles’ offers a pensive 100 minutes with the kind of devotion to China that shows clearly where the director’s heart lies. There are subtle digs at the bureaucrats, though these satirical swipes are never as sharp as Yimou’s founding years produced. Nonetheless, despite never catching the imagination in the way that it should – it simply lacks the balance between the dramatic and the ethereal – it is a film that offers intelligent, if flawed, viewing.