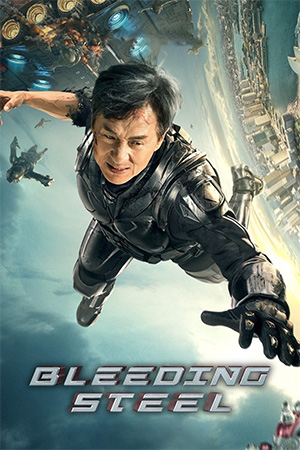 Jackie Chan has been stuck in a rut of late, seemingly content to churn out bland fodder like ‘Skiptrace’ and ‘Kung Fu Yoga’ to audiences just desperate to see him in action. And then, just when you begin to lose hope of seeing Chan involved in something significant again, you watch something like ‘The Foreigner’ and get a glimmer of where the sexagenarian could hopefully be heading. And then you watch something mundane like ‘Bleeding Steel’ and lose that sliver of optimism.

While his daughter lies dying in hospital, agent Lin gets a call to help transfer a vital witness to a safehouse across the city. Having to take the call, Lin misses his daughter’s final hours and also has to contend with a bloody ambush that sees most of his colleagues slaughtered and the witness captured. Thirteen years later and Lin is struggling to cope with the traumas of the past. When a book called ‘Bleeding Steel’ takes the nation by storm, Lin takes an interest as the story has an uncanny similarity to what he knows of the mysterious technology once worked on by the witness under his care years before. Lin tries to find the author to discover how he could know such things, but on arriving at the apartment he finds that he isn’t the only one who wants answers. A highly-trained force using high-tech weaponry storms the apartment and in the ensuing confrontation the author is killed. Lin is now on the radar of said force and is forced to team up with a cross-dressing conman who has his own specific agenda.

Starting with a brutal shoot-out and punctuated with a decent pursuit on the roof of Sydney Opera House, ‘Bleeding Steel’ definitely has its moments. The aforementioned gunplay is effective and sets the tone for what the viewer might hope would be a darker sci-fi film, kind of Chan does ‘Blade Runner’. Yet, even though the budget is there and the effects are mostly acceptable, Leo Zhang’s cyberpunk action film is full of huge gaps in logic. Yes, this is a film that focuses on future technology so there is the need for suspension of disbelief, but Zhang never gives the viewer enough to want to be bothered with such effort. There’s the very odd juxtaposition of robotic technology and futurism only set in a very uninterested looking Sydney, almost as if the protagonists in the story are the only ones who have access to the tools. Therefore a very 2018 looking Australia has a space ship flying around with little explanation and no parameters created as to who or what owns or uses the weapons.

‘Bleeding Steel’ starts with promise and then refuses to flesh out any of the plot details, leaving us bewildered shortly after our interest had piqued. To keep things lively there are a few effective fights between Chan and brooding femme fatale Tess Haubrich (who sports a constant expression as if someone has opened a tin of rotten corned beef under her nose). By the time the big finale comes though, this has become the archetypal production full of sound and fury signifying nothing and interest ebbs way quicker than it appeared. It’s so lazily written that even a ‘Police Story’ style climax is unlikely to do anything to redeem things and, needless to say, this doesn’t come close to happening. It’s a shame that, in the desperate attempt to ape slick Hollywood films, the makers here have ignored the fact that the best of the West are more than just special effects showcases. ‘Bleeding Steel’ makes one long for the days of ‘The Accidental Spy’.