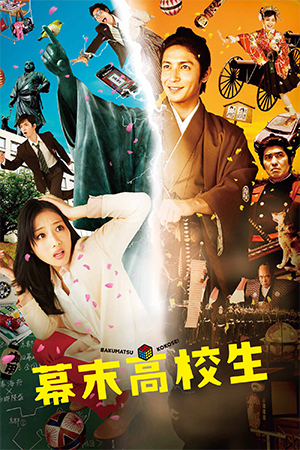 Schoolteacher Mikako struggles to get her students to appreciate Japanese history. When she and three of her charges are zapped back in time due to a strange app on the phone of class geek Takase, suddenly the need to understand 19th century Japan becomes vital. Mikako meets famous Edo-era figure Katsu Kaishu – a man who was the subject of a few of her lectures at school – but finds that far from being a hero, Kaishu is a seemingly cowardly, low-ranking official in the city government. With the enemy marching towards the city and the Edo inhabitants baying for war, Mikako takes it upon herself to turn the real Katsu Kaishu into the legend and correct the changes her arrival has made to history before she and her three students must return to the present.

Quirky, oddball comedies are a genre within themselves in Japan. Whereas they are never more than a niche elsewhere, they represent something of Japan’s own sense of humour that can be parochial to the uninitiated. ‘Time Trip App’ isn’t overtly kooky or obscure, but feels like a film that was never intended to travel beyond local shores. It’s humour and overall style is intentionally over-the-top without actually being that funny or enticing – a significant flaw for something pertaining to being a comedy.

‘Time Trip App’ has potential as all of these ‘fish-out-of-water’ stories do. The idea of the technological savvy 21st century protagonists meeting great figures of history is not without possibilities. However, Toshio Lee’s film cannot decide whether it should be lovably goofy ala ‘Bill and Ted’s Excellent Adventure’ or something a tad more sci-fi orientated like ‘Back To The Future’. It ends up being a little bland and all too reliant on all of the eccentricities of those aforementioned quirky genre flicks.

While it never satisfies as a comedy and certainly never succeeds as a playful piece of science fiction, it also appears quite lazy in construction. The app of the title is never explained, it’s limitations, origins and power never discussed therefore any feeling of ‘race-against-time’ excitement is woefully poor. Not that we need every detail spoon-fed to us of course, but to treat the plot pivot as such a trivial MacGuffin is completely inexcusable. ‘Time Trip App’ also drags along needlessly, too interested in underdeveloped pathos in the storyline’s final third. There are so much better examples of Japanese comedy out there which means that ‘Time Trip App’ has very little to recommend it.