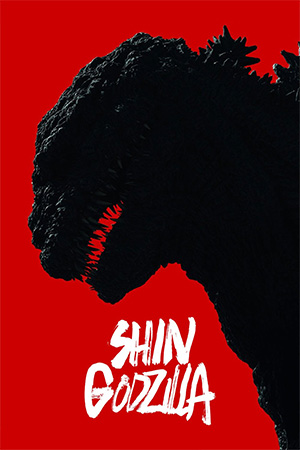 King of the Kaiju, Godzilla, returns in a Japanese production for the first time in over a decade. In the meantime, Hollywood has already rebooted its own version of the Toho legend and with a sequel hot on its heels, it seems as if the creature’s birthplace should offer their own big budget treatment.

Shortly after investigating an abandoned boat at sea, Japanese authorities are faced with an unprecedented crisis when a huge disturbance causes chaos in the waters. Theories range from a newly found thermal vent to a previously unknown fault-line, but footage leaked online shows the cause to be something very different. A large reptile shifts through the waters and just when it seems as if Tokyo is safe, it stands on its hind legs and makes its way onto land. Buildings are crushed and whole areas of the city left in pieces while the government tries to think of an appropriate answer to the problem. When they do use military force though, Godzilla reveals newly evolved weapons, namely fiery breath and proton beams that shoot out shortly after. It seems that nothing can stop the rampage of the creature until a coalition of Japanese scientists begin to identify a possible weakness in Godzilla.

Godzilla fans were suitably delighted to see the legend re-booted by his home country and especially so when the more traditional design for the creature was used by the film-makers. The problem for non-Kaiju fans is that some of the old problems also get brought into this 2016 re-imagining, namely the special effects. There was always a certain affection for the 50s and 60s films with a stuntman rampaging through a model of Tokyo in a rubber monster suit. Even modern audiences could understand the budget restrictions and charm of the movies of yesteryear. Unfortunately ‘Shin Godzilla’ doesn’t have the same excuse for some truly ropey effects; just the initial sight of Godzilla is humorous rather than fear inspiring as it features bug-eyes and bemused expression. Considering the budget used, the poor model work is very difficult to comprehend with shots of Tokyo looking more like Trumpton than the Japanese capital. It must be stated that many of the effects do work, but the ones that don’t – however much they might be in the minority – are jarring and stay in the mind.

Another major problem with ‘Shin Godzilla’ is the tone – is it an action film, a drama or a satire on Japanese bureaucracy? Most of the time it seems to be a political satire with endless scenes of politicians pontificating on what to do while occasionally the action switches to Godzilla himself. The tone is therefore incongruous and none of the drama has the impact it should because the previous scene has been so infused with very dry humour. It’s almost as if ‘Pacific Rim’ and ‘The Thick Of It’ were mixed together in some bizarre laboratory.

‘Shin Godzilla’ is entertaining, but should have been so much more. Not sure what it wants to be, the latest Japanese production of their beloved property is not the triumphant return some had hoped.