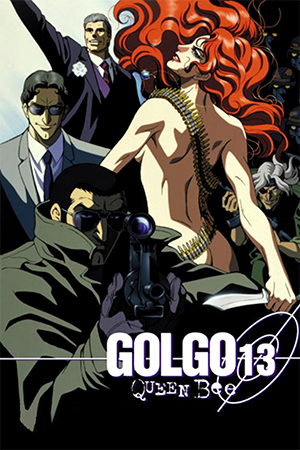 After making a relatively solid animated movie debut with 1983’s ‘Golgo 13’ (AKA ‘The Professional’), the character of Duke Togo had to wait a further fifteen years before appearing in his second anime outing. Considering the strong fanbase already established by the long-running manga, one can only assume the large gap was due to a lack of financial success. As to whether it was worth the wait, now that’s an entirely different matter…

When word gets out that the infamous guerrilla radical known as Queen Bee is out to kill a high profile presidential candidate, a secret deal is struck with the hitman Golgo 13 to have her assassinated. However, Queen Bee is not your average terrorist as she was ripped unmercifully from her childhood home and left to fend for herself on the streets. Once her true identity is revealed, Golgo decides that he must step aside as a very personal feud comes to a climax that can only end in tragedy.

One glance at the various taglines for ‘Golgo 13: Queen Bee’ would lead you to believe that the story will pit Golgo against the lovely but lethal Queen Bee. Unfortunately though, it isn’t quite as straight forward as that and the film spends the majority of its running time trying to flesh out the backgrounds of the secondary characters. Despite allowing these stories to unfold with a certain amount of style, none of them are particularly interesting and the lack of screen time donated to Golgo himself is the film’s major flaw. This oversight is something that even the director seems to be aware of, and he eventually attempts to shoehorn him in with several gratuitous sex scenes and some uncharacteristically sloppy attempts to complete the mission.

Of course this isn’t to say the film is totally without merit as there are still a couple of saving graces that keep you watching to the end. Although there aren’t many to speak of, the few action scenes on display are passable and the occasional gory death adds some much needed oomph to the proceedings. Similarly, the animation style has a rough yet somewhat charming appeal with the use of sketch-like freeze frames and split screen effects providing some additional highlights.

‘Golgo 13: Queen Bee’ is a short and not particularly sweet film that fails to make effective use of one of the coolest Japanese characters around. Hardcore fans may just about find enough positives to warrant a purchase, but everyone else would be far better off checking out the far superior 2008/2009 anime series.