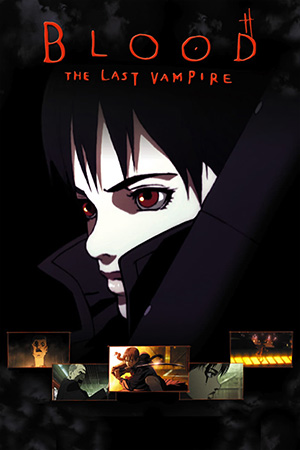 ‘Blood: The Last Vampire’ is considered by many fans to be a cult slice of anime action and is one of those films that always seems to come highly recommended. With the live-action remake due to hit cinemas in the next few weeks, I thought now would be a good time to take a look back at the original and give newcomers an idea of what is to come.

At first glance, Saya appears to be a normal Japanese girl who is just going about her everyday life. In truth though, she is part of a secret organisation who are employed to take down a group of demons that are terrorising Japan. When they are notified of two such demons who are inhabiting a school, Saya is sent in undercover to locate and eliminate the targets. Meanwhile, her colleagues have uncovered another demon who is acting as a bartender in the local red light district. It looks like tonight is going to be a busy and blood soaked night.

Originally intended as the middle part of a three episode OVA series, ‘Blood: The Last Vampire’ is a brief yet visually effective piece that shows definite potential. With an opening that is relatively devoid of meaningful dialogue, it easily manages to establish its dark and moody view of the world as well as providing a very strong introduction to the central character of Saya. Beyond this, it becomes a rollercoaster ride of action that pulls the viewer in and will certainly have you hooked right up until the final moments. Unfortunately though, as entertaining as all this is, the film is really undone by its lack of exposition and as the final credits roll you are left distinctly disappointed by the thousand or so unanswered questions and lack of any real depth.

Animation-wise, the film does look a little rough around the edges, but it’s a look that certainly seems to suit the overall style. Most of the characters are quite sharply drawn and unattractive to look at, which fits in perfectly with the glum perspective given to the world they inhabit. As for action, this is equally well crafted and although it isn’t particularly intricate, it does always look realistic and is consistently entertaining. Saya’s movements are best described as quick and to the point with nothing flashy and a generally pleasing outcome to the majority of the fight scenes.

Overall, I’d say ‘Blood: The Last Vampire’ is definitely a film that is worth checking out but it’s not quite as perfect as many fans would have you believe. Perhaps if the series had been completed it may have been bordering on the “classic” status, but as a standalone movie there are just far too many plot holes for it to fully succeed.