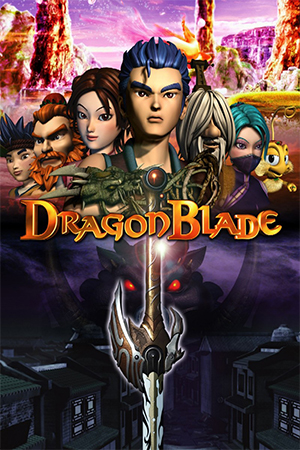 Over in Hollywood, the CG animated feature film has become something of a phenomenon of late.  As is often the case, this latest cinematic vogue has now reached Hong Kong and filmmakers are keen to cash in on its success. Thus, we have ‘DragonBlade’, a Chinese kung fu movie fused with the latest animation techniques from the west.  However, without a Hollywood budget and resources at their disposal, was it possible for such a venture to equal its American counterparts?

Lang is a teenage martial artist who one day dreams of uncovering the lost DragonBlade, a sword which will allow him to become the most powerful fighter in all the land.  However, his dream becomes a reality when his hometown is attacked by a monster who threatens his family and friends and looks to be invincible.  The only answer comes in the form of a small fairy who claims to know the location of the DragonBlade and she will help Lang in exchange for his freedom.  The only way for him to do this though, is to compete in a martial arts tournament and when he emerges victorious the fairy will put him on the right path.  And so, Lang sets out on a wild adventure, filled with lavish locations and mysterious enemies, that should hopefully lead him to the sword and provide him with the means to rescue the people he holds dearest.

As the opening credits began to roll on ‘DragonBlade’, I found myself wondering whether I had made a wise decision in purchasing this DVD.  The animation looked like something out of a kid’s TV show and the initial tone of the film wreaked of a pathetically clichéd kung fu flick.  Thankfully though, as I saw beyond the simplistic visuals and the movie began to find its feet, I realised that it was in fact an utterly charming adventure that managed to recapture a little of that old school kung fu movie magic.

Although it contains a lot of characters and ideas, ‘DragonBlade’ is actually extremely well put together. The opening segment is perhaps a little clumsy and obvious, but once you get beyond this it becomes a rip-roaring adventure that captivates throughout.  A big part of this is down to the characters, all of whom are extremely appealing and bear more than a passing resemblance to the classic kung fu characters of yesteryear.  Similarly, there’s quite a heavy martial arts movie influence in the action and it has to be said that it surpassed my expectations. Some real effort has been put into making it look as realistic as possible and the fantasy element gives each confrontation a somewhat magical atmosphere. My only minor complaint would be that there simply isn’t enough of it, but you can’t really grumble when scenes such as the tournament are so brilliantly executed.

The vocal talent chosen to participate in ‘DragonBlade’ is also extremely impressive, and it really helps to elevate the overall quality of the production.  Stephen Fung isn’t exactly my favourite actor but there is no disputing that he pulls off the leading role very admirably.  Alongside him, Karen Mok and Daniel Wu are also worthy of a mention as their distinctive oral talents are instantly noticeable and always pleasing to hear.  If there is one weak link in this department, it comes in the form of Sandra Ng. Even though she plays the cutest character in the whole movie, her brash tones are occasionally irritating and it just never feels like her voice suits the character.  That aside though, this is certainly another area in which the film accumulates additional plus points.

‘DragonBlade’ may lack a little in the animation department, but it more than makes up for it in the overall presentation. The film provides a really fun and family friendly take on the genre, as well as giving a knowing glance in the direction of traditional kung fu movie fans.