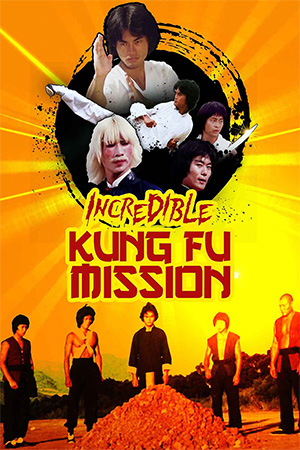 When a revolutionary leader is captured by a formidable gang and its fearsome leader (Tai), a famed fighter (Liu) is hired to organise the rescue. To this end the heroic fighter is given a hapless band of misfits to ‘help’ him in his deadly mission. The first task is to train this unwilling mixture of brawlers and odd-job men before finally setting off on the mission. At first the charges are far from co-operative, but the deadly legs of their employer soon kick them into shape and the team form a trust that seemed very unlikely previously. Now the hired men must get into the fortress and defeat the vicious hordes before rescuing the innocent man. However, facing incredible odds, the heroes’ bond is pushed all the way as the casualties begin to amass.

The ‘Dirty Dozen’ plot of desperate men hired to perform a mission that is their last chance had apparently been very popular in the East. Hence it was inevitable that the late-70s kung fu boom would capitalise on this very open narrative. Pleasingly, ‘Incredible Kung Fu Mission’ is peppered with a decent mix of humour, sentimentality and superior fight action, creating a solid independent feature. John Liu was never the world’s greatest actor, but his role here is good and acts as the perfect springboard for his wonderful physical skills. Backing Liu up is a supporting cast that, although not given a great chance to shine as fighters, seem quite at home as his assorted band. If there is one major flaw in the film it is the fact that classy screen presences like Robert Tai, Alan Hsu and the boisterous Kam Lung are underused; Liu tends to dominate the action, but little room is given for the aforementioned stars to shine. Nevertheless this is another enjoyable independent kung fu flick that, while not setting the world alight, is at least an entertaining film throughout.