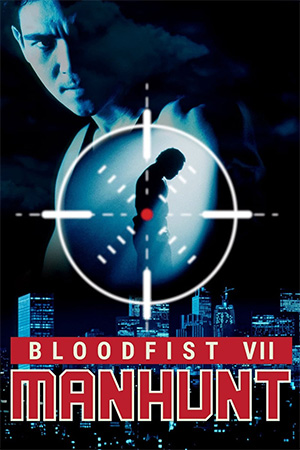 After he meets a somewhat lost-looking woman in a bar, Jim Trudell (Wilson) generously offers to give her a ride out of town. As it’s already getting late though, the pair decide to stop and spend the night at a nearby motel. When Jim wakes up he finds that both the woman and his car are gone so he sets out to try and track them down. Using a little detective work, he manages to locate her house but once he gets there he is forced to wipe out a violent intruder. Unfortunately, the man turns out to be a cop and now Jim will have to go on the run, fighting simply to stay alive and to clear his name – with the very police who are trying to frame him.

Another day, another ‘Bloodfist’ sequel. As you might expect, this one tells the familiar tale of a former soldier/superhuman who is forced back into action after he gets wrapped up with a group of criminal types. Well, at least for the most part anyway. The opening 20 minutes or so do retain a slight air of mystery, if only because we don’t really know who or what might prove to be important to the plot. Sadly though, once Wilson’s character is arrested it slips right back into the standard man-on-the-run scenario with an absolutely ridiculous motive for all of the villainy. That being said, I’d still put this one a notch above the last few outings simply because it all rattles along at a decent pace and there are some solid performances from Wilson, Steven Williams and Stephen Quadros.

As for the action, I think I’m starting to sound like a broken record when it comes to discussing these movies. This particular effort certainly doesn’t bring much new to the table either, but there are at least a few fun punch-ups that are entertaining in a B-movie sort of way. It’s also nice to see that, unlike the last few parts, our hero actually lives up to his title and none of his opponents pose much of a challenge to his reported skills. We also get a couple of solid shootouts and chase sequences that certainly help to maintain your levels of enjoyment.

‘Manhunt’ travels the same well-worn path as its predecessors (particularly ‘Bloodfist IV’) with a very predictable plot and some low grade action. As basic as it all is though, I found this one fairly easy to warm to and I’d definitely place it at the higher end of the ‘Bloodfist’ spectrum.