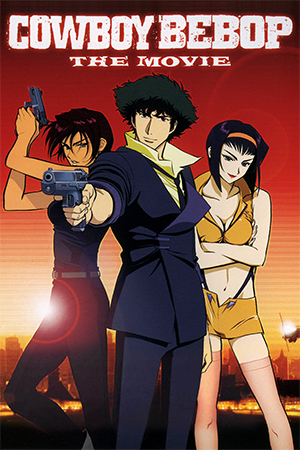 Originating in 1998, ‘Cowboy Bebop’ was arguably the first anime series to be truly accepted and adored by an international audience.  The ingenious relocation of a group of wild west style bounty hunters into science fiction surroundings was a joy to behold and so stylishly accomplished that it left audiences crying out for more.  Almost inevitably, once the series had run it’s course a film was devised which left fans wondering whether a show that worked so competently on a half hour basis could make the leap to the big screen.  Come on now, did they really need to worry?

When a tanker truck is blown to pieces in the middle of a busy street, it unleashes a deadly virus into the air that begins to infect a number of innocent bystanders.  The government troops seem incapable of capturing the culprit so a reward is placed on the criminals’ head which instantly alerts the crew of the Bebop.  With the bounty set at 300,000,000 Woolongs, Spike, Faye, Jet and Ed combine their resources and soon discover that the man behind the tragedy was Vincent Volaju.  Having identified the target, you would think that this was an open and shut case but when it also emerges that Mr. Volaju has been dead for tens years, things begin to get interesting.  However, nothing will prepare the crew for the horrors that are also waiting in the wings and this could very well be the toughest trip that our intrepid heroes have ever had to face.

For those of you unfamiliar with the ‘Cowboy Bebop’ universe, the concept behind the show can really be whittled down to a group of misfits who find themselves thrown together in a spaceship and forced to pursue criminals for cash.  It may not sound like much but as a half hour series this worked brilliantly and provided some breathtaking episodes that succeeded because of superior artistic techniques, characters with real human foibles and numerous cleverly devised storytelling arcs.  Now, taking this one step further and creating a feature film is no mean feat but with such a strong base to the show and the seemingly endless opportunities to create new adventures, it manages to succeed on almost every level.

For starters, even though there are a number of central characters within the concept, the film is capable of providing each of them with a decent amount of screen time and their own sub-story.  That said though, it is always aware of the fact that the film requires a central protagonist and it is Spike who is chosen to lead the pack.  Personally, I think this is a very astute decision as I’ve always felt that his chequered back story and very obvious emotional baggage make him the most interesting character to explore and he certainly doesn’t disappoint.  In this particular outing he not only encounters an enemy who appears to be his equal in almost every department, but he also makes a new friend who exposes some emotional dilemmas that he has previously ignored.  It’s this kind of easy to relate to characterisation that puts Bebop way ahead of the competition and it never ceases to amaze me just how easily our animated heroes are able to convey emotions in a more realistic manner than a number of actual actors.

In the action department, the sheer scope of a film also affords the creators the added freedom of squeezing in a few more confrontations.  One of the things that always stood out about the series was its ability to finely balance the various action elements which is a skill also echoed within the film but the stakes have been increased thanks to the extended running time.  Once again, it is Spike who comes out on top but this is not exactly surprising when you consider that he is so proficient in each ability – fighting and flying.  The space battles are excellently shot with a real sense of motion and speed whilst the hand-to-hand combat is also extremely impressive for an animation and thankfully never dips into the realms of the impossible.

When it comes to the animation, ‘Cowboy Bebop’ has to be considered a revolutionary leap within the anime timeline.  Not only is it a wonder to behold in terms of artistic merits but it is also outstandingly directed with camera techniques that would make most live-action directors envious.  As far as the film goes, it really recaptures everything that made the series so enthralling with a multitude of new ideas thrown in that will leave you astounded at quite how they were capable of making an animated adventure appear so lifelike.  I also have a preference for the way the action is shot because even though it sometimes appears in a flick book style, it does seem to suit the overall look of the series and is always gripping to watch.

If I was being forced to pinpoint one weak point for the film then it would probably have to be the story as even though it remains immensely enjoyable in spurts, it is perhaps not as watertight when you look at the complete picture.  As the movie opens, we are treated to some extremely intriguing set pieces that open up a whole host of opportunities but as the story progresses there are moments when a few cracks emerge. This is not to say that it is a major problem but it does lack some of the tighter plot points that were prominent in the series when it was at it’s peak.  In part, I would attribute this to the fact that the writers are used to the confines of a 30 minute episode which seems to be corroborated by some rather noticeable segments to the film.  However, I wouldn’t call this catastrophic and it won’t detract from your enjoyment but it is perhaps the reason it doesn’t quite reach the five star mark.

Finally (as if I haven’t already talked about this movie enough), one couldn’t let any review of ‘Cowboy Bebop’ slip by without mentioning the soundtrack.  Within the series, the music was a fundamental factor, not simply because it was quality music but also because it seemed to perfectly capture the essence of the show.  Thankfully, I’m happy to say that this bizarre fusion of jazz and pop has been successfully ported across to the feature film and it is littered with numerous infectiously catchy tracks.  Most of these are performed by the resident series composers ‘The Seatbelts’ and their upbeat riffs really add atmosphere to the proceedings as well as leaving you humming the various themes for days to come.

Just in case the essay above wasn’t a big enough hint, I’m a huge fan of ‘Cowboy Bebop’ and I’m happy to say that the feature film is certainly no exception.  It had a huge reputation to uphold but fortunately all of the popular aspects are squeezed in successfully and the film is an excellent example of an all-round adventure flick.  If you are yet to experience the wonders of ‘Cowboy Bebop’ then this is as good a place as any to start and it’s bound to get you hooked.