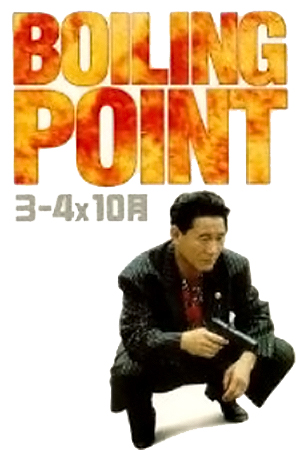 Masaki is a quiet man who works as a humble gas station attendant whilst filling his spare time sitting on the bench for his local baseball team or pursuing his interest in motorbikes.  However, his life suddenly takes a turn for the worse when he has dealings with an uncompromising customer who also turns out to be a member of the local Yakuza.  This causes the Yakuza to come down hard on the gas station, demanding money as compensation so Masaki asks his best friend (who also used to be a Yakuza member) to talk with his old contacts and perhaps put a stop to the disagreement.  Unfortunately, the offers of a peaceful resolution are spurned so Masaki heads to Okanawa to buy himself a weapon.  Once there, he uncovers a former gangster (Kitano) who has the means to acquire a gun but also has his own motives for wanting to get back at the same men.  With so many people out for revenge on the Yakuza, the finale can surely only lead to bloodshed.

A mystery to some but a master to others, Takeshi Kitano’s directorial talents can often be perceived as slow or uninteresting due to his lethargic approach. For me though, the lack of action always leads to interesting character interaction that can be more thought provoking than your average gun battle.  ‘Boiling Point’ is another example of this format, although it certainly has the distinct feeling of two separate stories rather than a film as a whole.  My reasoning behind this is that the opening half is really the story of your everyday person whose life is sent into disarray by his unexpected involvement with the Yakuza.  In contrast, the second half follows Takeshi Kitano’s character as an outcast member of the Yakuza who is clearly on the downward spiral.  However you perceive it though, ‘Boling Point’ proves to contain an exceptionally interesting take on the genre as both segments highlight two very opposite ends of the Yakuza lifestyle with Kitano’s easily identifiable storytelling techniques put to good effect and acting that is spot on from all involved.

The directorial approach, as per usual, is one of stillness and silence (so action fans beware) but there is still a portion of bloody violence towards the end, although don’t expect a segment from a John Woo picture.   If there is one bleak moment within ‘Boiling Point’ then it can most likely be put down to the somewhat black sense of humour that is used to portray the darker side to Kitano’s character.  It’s not that it doesn’t fit in with the film, it’s just that it can sometimes be a little hard to stomach but you can see how it is necessary to prevent the viewer from growing attached to what is clearly an evil man.

‘Boiling Point’ is yet another entry into Takeshi Kitano’s back catalogue that I would highly recommend.  For newcomers it may prove a little difficult to get into and occasionally confusing but those already enjoying Kitano’s films will easily find several merits here that are synonymous with his best work.