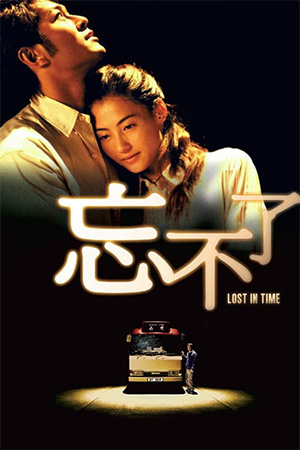 When ‘Lost In Time’ was announced, I’m sure I wasn’t the only person who was eagerly awaiting Derek Yee’s return as a director. Yee has never been prolific as a director, but has gained a reputation as one of the most important film-makers still in Hong Kong. Brave directorial work on masterpieces like ‘The Lunatics’ and ‘People’s Hero’, not to mention the box-office smashes ‘C’est La Vie Mon Cherie’ and ‘Full Throttle’, have all been stamped with Yee’s indelible mark of quality.  It was therefore with great interest that I sat down to Yee’s latest offering.

After her fiancée is tragically killed one night in a road accident, Holly (Cheung) finds her happy life descend into misery. Though she vows to look after her adopted son, she finds that the lack of support she receives from her inconsiderate family begins to take its toll. Despite her feelings of loneliness, Holly decides to have her fiancée’s wrecked minibus repaired and bravely thinks about earning a living from it. Though the fellow drivers are initially sympathetic to her plight, they find her decision to enter the cut-throat and gruelling world of minibus driving to be a foolhardy one. Holly perseveres with her ideal even though her first few outings in the minibus prove to be unprofitable and, more pertinently, dangerous. Coming to her rescue is colleague Hale (Lau China Wan) who feels a responsibility because of his friendship with her late boyfriend. Taking time off from his own work, Hale teaches her how to turn her route into a financially feasible one while also managing to strike up a friendship with the son. Gradually though, Hale’s feelings begin to turn from admiration for Holly to attraction and finds some solace to take his mind off his own loneliness. Nonetheless, some difficult situations arise for both Hale and Holly before they can decide on their future.

As with the exceptional ‘The Floating Landscape’, ‘Lost In Time’ attempts to tackle the subject of grief without falling into the trappings of melodrama. Once again though, a Hong Kong film succeeds in conveying emotion and resonance without dialogue always being necessary. Obviously many excellent productions have chosen to portray the heartbreak of losing a husband or wife with emotional fireworks, but the treatment that Derek Yee (and Carol Lai) gives the issue is equally poignant. After a relatively long absence from the screen, it is comforting to report that Derek Yee has retained his ability to craft his vision in such a way that bridges the gulf between traditional arthouse cinema and mainstream expectations.

Though ‘Lost In Time’  opens as study of grief, it advances as a portrait of hope and the value of friendship. The character of Holly is subtly drawn, starting off as a young woman who is understandably lost in the tragedy and sudden pressures that her loss creates, but as the film progresses her basic gumption is highlighted. Hale is also developed in such a way as to leave questions unanswered until the end; the sudden revelations about his own loneliness manage to fill in any of the blanks and give the character an even greater degree of pathos. With characterisation so strongly emphasised in the film, it’s encouraging to see that both of the pivotal figures are empathetic enough to make Derek Yee’s goal successful.

While ‘Lost In Time’ doesn’t quite compensate its intentionally slow, measured pace with the kind of visual potency that Carol Lai achieved with ‘The Floating Landscape’, there can be no doubt that the calibre of the acting more than makes up for any shortcomings. Cecilia Cheung has been derided in some quarters for past films, unfairly seen as eye candy and little else. Recent years have finally seen the actress gain the respect of audiences and her performance in ‘Lost In Time’ will undoubtedly convert many of her existing detractors. Though her performance is mostly understated, it is consistently strong; it initially seems as though such a relatively young performer has bitten off more than she can chew with the character of Holly, but Cheung emerges triumphant. Cecilia is expertly supported by the peerless Lau Ching Wan, an actor who very rarely disappoints. Providing able support is Paul Chun Pui who, even in his small role as Holly’s father, is superb.

‘Lost In Time’ is a different film to ‘The Floating Landscape’ and has different targets. While I would still say that the latter was a more effective film, ‘Lost In Time’ still gains merits for its solid production values and wide-ranging qualities. Its deliberate pace may not sound appealing, but it is a highly recommended return for film-maker Derek Yee. Let’s hope we don’t have to wait another four years for his next work.