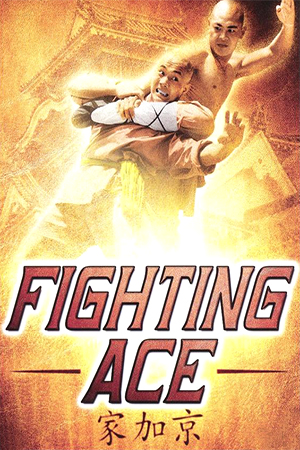 Although the majority of kung fu films, especially the independent productions, are reliant on a familiar stock of clichés, some have used these to their advantage. Even the most tired themes can be presented in a slightly oblique and interesting way. This seems an appropriate introduction for the John Liu vehicle ‘Fighting Ace’ as it initially manages to make the generic conventions appear pleasingly fresh, only to come undone near the end due to blandness.

When an evil kung-fu master kills a couple in search of a secret fighting manual, the housekeeper is left to bring up their infant son and encourage him to gain revenge. On reaching manhood, the orphan (Liu) learns kung-fu basics and then, with housekeeper still by his side, he searches for a skilled master to follow. Thankfully he happens upon a renowned leg fighter (Kwan Yung-Moon) who has been employed by a wealthy local, therefore he’s given the opportunity to learn in secret. After a brief time under his new master’s care, the secret student is discovered by the employers and thrown out of the house along with a newly acquired sidekick. The friends work as street traders and use their time to observe the various fighters who wander the streets. Following a few entanglements, they find two new masters who teach them a variety of kung-fu styles and techniques. By the time the avenger meets his parents’ killer, he’s fully trained and ready to exact revenge.

The description for ‘Fighting Ace’ doesn’t exactly make it jump off the page, but it proves to be a better than average effort. Firstly the expected plot twists and turns prove to be enjoyably handled; the usual master/student story is expanded to accommodate four masters and an extra student. Even the opening catalyst for revenge allows for a bit more empathy than usual and John Liu’s character is given extra depth because of it. Perhaps it is this character enhancement that makes Liu’s performance more charismatic than he often is and instead of being just a superb screen fighter, he has a certain charm here as well. The leading man is comfortably assisted by a solid cast including fellow kicking king Kwan Yung-Moon who steals the brief scenes he features in. The fight action is also excellent to watch with a bit of innovation going along way. As was mentioned, the film loses some of its qualities later on with the clichés happen at a slackly delivered pace; the last twenty minutes packs in all of the tiresome moments and again features a very inadequate epilogue. ‘Fighting Ace’ features one of the sequences that was in just about every independent kung-fu film of the time, perhaps due to some obscure Asian law: the young heroine of the piece must meet a gang of lecherous bullies who harass her only for the hero to leap in at the last minute. Seeing scores of these moments before, one wonders if ancient China was one of the most dangerous places ever, especially if you were twenty-something, female and attractive. It’s this kind of cinematic drudgery that stalls this in the three star category.