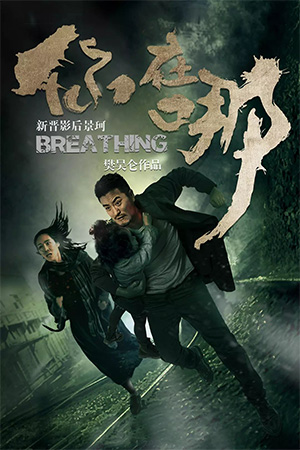 Having separated from her violent husband, single mother Wang Nan works in a textile factory whole doting over her daughter, the one good thing to come out of her abusive marriage. While visiting a fair, Wang queues up for tickets while her daughter and Wang’s work colleague go for candy sticks. However, when the guardian is momentarily distracted, Wang’s daughter is snatched, an action that follows a spate of similar kidnappings in the area. The distraught mother teams up with local detective Huo to find the missing girl before something much worse happens.

TV actor Fan Haolun makes his debut as writer and director with ‘Breathing’, a film that promises much more than it delivers. Starting slowly and never building any kind of momentum, ‘Breathing’ is a missed opportunity for a Chinese film noir, the kind that have been all the rage in recent years. There should be something inherently tense and gripping about a mother searching for her kidnapped daughter; it’s something that is such an emotive topic that it should get the hairs on the viewer’s arm standing up. ‘Breathing’, however, is much more interested in obfuscation and ends up being an experience to feel very little emotion towards.

‘Breathing’ starts patiently, but implies that the trail will be pieced together while the audience waits for a resolution. Jing Ke is a solid lead as the traumatised mother relying on her own wits to track the kidnappers down. Unfortunately there are so many questions left unanswered that however good the lead performance is, the film as a whole is found wanting. Director Fan Haolun seems to be more concerned with playing with flashbacks and flash-forwards than he is with constructing a story of any real depth. By the end of the film therefore, the viewer is left admiring some of the technical proficiency of Fan Haolun’s debut, but is mostly indifferent to the product as a whole.