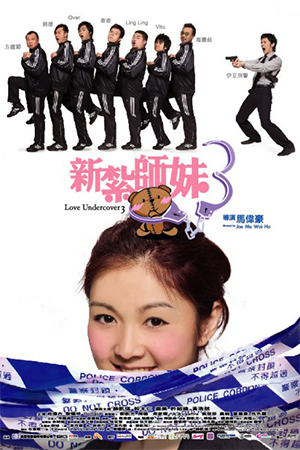 Miriam Yeung may have outgrown the franchise that made her name as a bankable star, but director Joe Ma was clearly unwilling to let go quite so easily. How do you find a replacement for a star who epitomised the empathetic and impossible to dislike ‘girl next door’ though? The answer is to find a rising star who requires a helping hand to push her to the next level on the Hong Kong celebrity strata and who also embodies the same charm that Yeung blended into her ‘Love Undercover’ performances. Fiona Sit has already impressed this reviewer with her excellent work in ‘2 Young’ and ‘Embrace Your Shadow’, so hopes were high for the enjoyable film series to take a refreshing new direction.

CK Fong and her husband have left Hong Kong to attend the World Cup and her old superior Chung begins to pine for his adoptive daughter. With a gaping hole in Chung’s life and the Hong Kong police force needing to be filled, the search is one for a replacement who will slot conveniently into place. Chung and his colleagues don’t have to wait long though: during the journey away from Fong’s in-laws, they crash into an unsuspecting cyclist who turns out to be the answer to their prayers. The victim, Fan (Fiona), escapes unscathed, but saves the others and impresses them with her delightful disposition. Chung persuades her to consider the police force as a career move and, after hearing the details of the salary, she agrees to go through the training programme. With the help of her new friends, Fan passes all of the tests and is now ready for her first assignment which just so happens to be a teaming-up with suave Japanese Interpol detective Suzuki.

‘Love Undercover 3’ is a shambolic film that uses all of the Cantonese comedy clichés that turns the stomachs of so many foreign viewers. Obviously that statement may appear arrogant as it was never intended to travel, but its questionable as to whether local audiences were rolling in the aisles during its release. Full of pantomime humour and unfunny winks to the audience, this is a patchwork film that has more shouting and posturing than a Brian Blessed convention. It may be a Canto-centric work, but what we see on screen is hardly going to inspire us to enrol in an evening course to find out where the laughter is.

Redemption comes in the diminutive shape of Fiona Sit, an actress who is giving her first starring role in the mai-le-to genre. Her sheer cuteness and beguiling charm is so difficult to ignore that she draws the unsuspecting viewer in with the same power as the ‘Death Star’s tractor beam. Her character is poorly written and hardly an appropriate replacement for CK Fong, but Sit’s doe-eyed sweetness could melt the polar icecaps let alone the resistance of a hardy film reviewer. The Andrex puppy has competition for the award for most ‘ahhhs’. That the film is so reliant on just this one side of a very talented actress’ abilities speaks volumes for Joe Ma’s sloppy handling of this threequel.

The writing may hinder Fiona Sit, but it practically buries what could be considered a storyline in an avalanche of weak jokes and painfully extended sketches. The finished production eventually resembles a poorly thought out television sketch show from yesteryear rather than a big screen work that expects patrons to pay to see it. A promising opening seems to recapture the fun of the original two films, yet it isn’t long before it settles into the predictable malaise of many Hong Kong comedy films, namely the exclusion of plot in favour of farce. We don’t expect a labyrinthine narrative, but we do demand some framework to work the set-pieces into. This, unfortunately, seems far too challenging a task for Joe Ma.

‘Love Undercover 3’ is packed with a cast all too willing to overact for the camera while also featuring a somnolent leading man who offers little for Sit to work with. Joe Ma has shown his skill at turning commercial fodder into bright and breezy fun. This, though, is a plot-less, meandering follow-up that proves to be as engaging as being happy slapped by the cast of Dick Whittington.