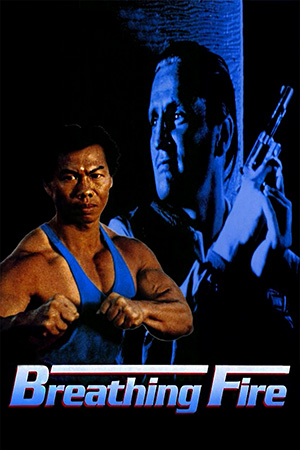 Hong Kong kung fu and American B-movie cheese collide in the fast, fun and oh so silly ‘Breathing Fire’. Charlie (Ke Quan) and Tony (Saavedra) are brothers and the two, well, just gosh darn love kung fu. Wanting to impress their dad (Trimble) by winning the local martial arts tournament, the two brothers’ are gifted fighters. However, their dad can’t make it as he, you know, has to go rob a bank with his gang of goons. Wait, what! Yep, the boy’s father is a bad ass criminal (his slick hair, suits and massive mansion should have alerted the boys to this by now!) and for reasons that are far too complicated to go into here: the film features the brother’s teaming up with their uncle (Neil) to thwart their father, protect a cute girl, participate in training montages and kick an awful lot of ass.

Now if the film was just as straightforward as the quick summary above it would be a blessing but with three credited directors and a ton of story strands, plot diversions and just general randomness ‘Breathing Fire’ is all over the place. We also get Vietnam flashbacks, a fight with little people (!), the search for missing parts of a plastic pizza (!!!) which holds the mould of the key to the hidden fortune stolen from the bank (are you still with me?), Bolo Yeung in drag (wait, what!!) and a whole heap of late 80s/early 90s awesomeness/awfulness. As confusing as it all sounds, it somehow all works and thankfully leads to not one but two awesome fight showdowns. Sure the acting is often non-existent, I’m looking at you Mister Ed Neil, but boy can these dudes fight. Again I’m looking at you Mister Ed Neil: who pulls off some incredible moves and kicking techniques in an almost non-stop barrage of fight scenes.

For all its craziness and incoherence, ‘Breathing Fire’ certainly delivers on the fight action. The high impact fights have a distinctive fast and furious Hong Kong flavour to them with all the principals getting to flex their kicking abilities. Jonathan Ke Quan (from ‘Temple of Doom’ and ‘The Goonies’) may play an annoyingly high pitched voiced twerp but impresses in the action scenes: Short Round can fight! He’s backed up by the rest of the cast with Saavedra, Tackett and Trimble all showcasing their impressive fight skills. Neil makes the biggest impression though with plenty of eye popping bootwork. While he’s not in it that much (playing a token bad guy goon) Bolo Yeung does get a fair bit of fight action and gets to dress up in drag. So there’s that also.

Seriously though, ‘Breathing Fire’ is a lot of fight action fun if you can go with it (and leave one’s pretension at the door!) that blends B-movie American cheesiness with some blistering Hong Kong styled fight action.