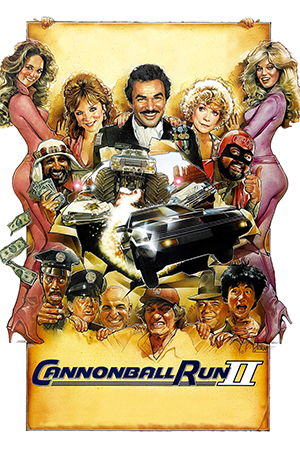 When he fails to win the original ‘Cannonball Run’, The Sheik decides to finance a whole new race in which the winner will receive a prize fund of $1,000,000.  He sends invites to all the previous competitors and all the gang seem to be present but there is one small problem; Fenderbaum (Sammy Davis Jr.) owes money to a mob organisation and when they discover The Sheik is an outlet for money they decide to kidnap him.  It’s up to our collection of motorists to forfeit their places in the race and help out an old friend (and also the source of the prize money) before heading onto the finish line to see who will be victorious.

After the success of ‘The Cannonball Run’, a sequel was planned with most of the cast members making a welcome return.  Amongst their number was the Chinese techno wiz with a talent for Kung Fu who is now more instantly recognisable in the west as a certain Jackie Chan.  Whether it due to contractual obligations or a genuine enjoyment of his experiences on the first film, Chan the man returned to reprise his role which contains slightly more screen time than his “blink and you will miss it” cameo from the first film.

This time around, Chan’s character is paired with ex-James Bond villain Richard Kiel (better known as Jaws) who acts as his translator throughout due to his limited grasp of the English language.  Most of their antics are restricted to the car’s impressive gadgetry or stereotypical “Asian” jokes but Chan does get to partake in two of the film’s major fight scenes.  The first of these comes when the team stops off for gas and run into a gang of hazardous Hell’s Angels (again!).  Thankfully, the director has learnt from his mistakes and opts to include sound effects that serve to enhance a scene that would most likely be considered average in a Hong Kong flick, but here it is light years ahead of anything else produced in Hollywood at this time.  Jackie’s input is also obvious due to the inclusion of his trademark fast and intricately put together movements, but unfortunately it doesn’t appear he chose the camera angles as they often restrict our view of the action.  For the second brawl in the film, all of the characters get involved with comedic results so Chan has to make do with a brief appearance alongside leading man Burt Reynolds.

‘Cannonball Run II’ as a whole, definitely suffers from a case of what I like to call “Home Alone 2 syndrome”. By this, I mean that it is practically identical to the first film with some newly substituted gags.  To be fair though, what else can you really change about a film in which the main aspect is a car race from Connecticut to California? Thankfully though, it does still retain the majority of its likeable qualities, such as enjoyable star partnerships, funny jokes, fast cars and pretty girls. All of these really help to keep it on the right track, and fans of the first should definitely seek out this sequel.