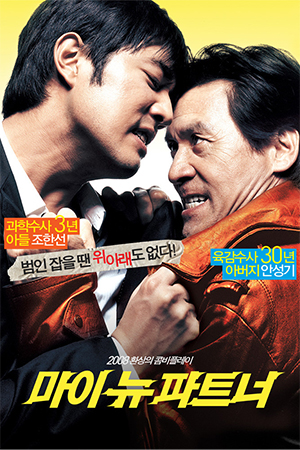 Young-joon is an ambitious police lieutenant heading up an investigation for internal affairs regarding police corruption. The task brings back terrible memories of his father, Min-ho, a disgraced cop who was caught taking bribes and packed off to the other side of Korea on ‘gardening leave’. The son must confront the father when a suspect flees to Busan and, as he works for the local authorities, only Min-Ho can assist in the task. Still blaming his father for his mother’s untimely death, the reunion is far from a happy one and their years apart have only emphasised the gulf between them.

Working with pater is one challenge he can barely handle, but Young-joon also has to contend with an eccentric team of officers who swear allegiance to his father. Their relaxed, not to say disorganised, approach is at odds with their new superior’s taciturn obsession with minutiae. Nonetheless, the mixture of skills yields results and father and son are soon embroiled in the world of a corrupt tycoon with links to suspect Yu-Ri.

The increasingly confident film industry is, not surprisingly, looking to the very familiar to bolster its output. ‘My New Partner’ is the kind of slick cop movie that could just have likely come from Hollywood, so professional, yet unremarkable is its execution. ‘My New Partner’ is part buddy-cop story, part ‘fish-out-of-water’ and finished with a healthy dollop of intense action sequences near the end, a Pot-Pourri of all of those blockbuster staples from the West. Nevertheless, as with its obvious inspirations, there’s undeniable fun to be had from the assured handling of the clichés.

‘My New Partner’ is at its best when it plays on the parochial Busan cops trying to deal with their cosmopolitan Seoul superior. It is less successful when it tries to blend in the dramatic story of redemption on the part of Min-ho, a plot strand that is needlessly overblown at the end. Kim Jong-Hyeon is unable to convey the thawing relationship between father and son with the vital subtlety that befits the characters and their issues. Ahn Sung-Ki is difficult to fault in most performances he gives, but even he can only imbue a certain amount of pathos into the drama.  This means that ‘My New Partner’ is a glossy and sharply packaged Korean production, but its attempts at emotional resonance are not entirely successful.