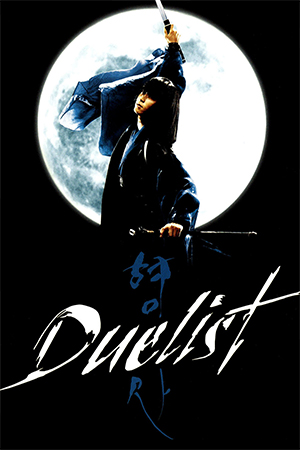 In 1999 South Korean director, Lee Myung-Se, wowed audiences at festivals around the world with his moody, action packed detective film ‘Nowhere to Hide’. However, while some were astounded, others were confused. In Lee’s films, movement and music take the place of traditional dialogue and visual storytelling is the key. This ethos is magnified to one hundred percent in his new film ‘Duelist’, a period detective film trapped inside a love story. It will not likely win back those people who hated ‘Nowhere to Hide’, but if you are willing to try something new, this is one of the classiest cinematic experiences you will find in a long while.

Namsoon (Ha Ji-Won) is a female detective living in Koreas Chosun Dynasty. Taught everything she knows by her mentor Ahn (Ahn Sung-Ki), she nonetheless uses her brain very little. If it moves, hit it, seems to be her motto and while her superior Ahn tries repeatedly to teach her patience and wisdom, she is pretty much set in her ways. Tomboy does not quite do it justice. The two become embroiled in a political plot to unbalance Korea’s economy when they are asked to discover which mysterious organisation is forging money and releasing it into circulation. During an undercover operation, a planned bust goes awry when a seemingly unrelated character turns up to make trouble. An overtly feminine swordsman know to the locals only as Sad Eyes. Namsoon does not waste time engaging the deadly assassin in a duel. However, as the pair twist, turn, attack and generally try to destroy each other, something happens.  A connection occurs between the two which can only lead to devastation.

Long time fans of Korean cinema will know the drill by now. ‘Duelist’ goes for your heart. There is no handy plot device which will make things all work out in the end. Blood is spilled, people die and it generally all gets a bit messy. That has not to say there is not fun here though, because both in Miss Ha’s performance and in director Lee’s visual wit there is much to marvel, gawp ‘and’ chuckle at. The opening scene which sees Namsoon drunk on the alcohol she is supposed to be undercover selling is amusing and one in which she and her mentor jump and fall round themselves trying to catch a robber in a narrow alley is pure Benny Hill, complete with silly music and sped up camera work. While this sequence had me in stitches, I hear others whine and moan about how it was a serious film just a moment ago, and then an all out farce the next. Well, in my experience this happens in life too. Why a film should have to stick to one genre alone is just confusing to me and Korean cinema is generally a place where this rule is broken. Lee Myung-Se is trying to give us something unexpected, something we have not seen before. He wants to challenge the audience not cater to it. I prefer that sort of respect.

Another area where we are challenged is in the action. ‘Duelist’ contains some of the most beautiful action I have ever seen. Each of the duels (I would not like to call them fights, they have more in common with a dance) are startlingly original. With both Miss Ha and Mr Gang having trained extensively for these scenes, they really are a marvel to behold. Somewhere between a tango dance and reckless sword fights, they leap from the screen, bathed in beautiful lighting and captured with clarity by the director’s eye for movement. Even where the film has no action in a traditional sense, the movement is still the focus. The tactile way in which we interact with the everyday world is shown in every scene. There must be fewer than twenty pages of dialogue in the entire film; a fantastic achievement by the director has been made to tell most of this story without any. The sets should get high praise too. In a film that depends so much on surroundings, they have spent what must easily be most of the budget on building a huge recreation of a market town in the Chosun era. You can almost feel what it would be like to live in those times.

Ha Ji-Won on has improved with each new film she stars in and what separates her from many other K-cinema actors is that she is game to try different things. From the horror of ‘Phone’ to the gross out comedy of ‘Sex is Zero’ she has the ability to completely inhabit the role she is playing. ‘Duelist’ is no different. While she certainly is not your typical action movie heroine, her almost comedic tomboy ways mix with the underlining emotional content very well. Of course, this is given even greater importance by the feminine characteristics of Gang Dong-Won’s Sad Eyes. In a way, their gender roles are reversed and it brings a unique feel to the overall film. Of course, the way both characters are is highly unrealistic considering the time ‘Duelist’ is set, and this is once again director Lee’s way of challenging our perceptions of what a period film like this should be. Ahn Sung-gi once again gives stellar support as her mentor. His raspy voice and odd way of moving leaving an impression long after the film has ended. Mostly required for comedic sequences he nonetheless steps up his game when we hit the more serious parts of the movie and his on screen relationship with Ha is both touching and realistic.

So it will not be for everyone. It consistently zigzags and u-turns all the way to its inevitably tragic end, taking in everything from comedy to tragedy, whilst throwing out the filmmaking rule book. Anyone looking for depth in dialogue is out of luck. Its simple story is basically this: two people who fall in love pay the ultimate price for being on opposite sides of the law. Sub-plots exist, but only to give the film its much needed humour.  If you go in expecting an action film in a traditional fight scene sense, ‘Duelist’ will be likely to disappoint. This is a sharply original love story set to incredible moving pictures. It has beautiful actors, heartfelt emotion and a genuine sense of originality. If nothing else it shows just how much cinema may have lost with the advent of sound, what we say is not nearly as important as what we do, and that makes Lee’s film special.