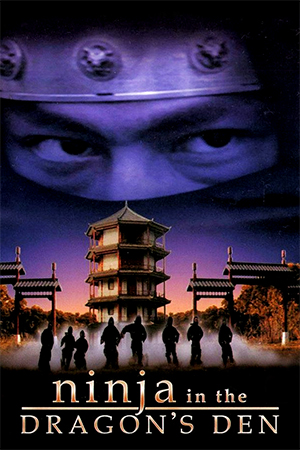 Having catapulted Jackie Chan to superstardom with ‘Snake In The Eagle’s Shadow’ and ‘Drunken Master’, far-sighted producer Ng See Yuen decided to look for a fresh new face to hopefully follow a similar path. After searching for an unknown to take the lead in his new production, Yuen stumbled upon a Chinese-American named Lloyd Hutchinson who not only had a commanding physique and good martial arts ability, but could also act and had a certain screen presence which could be cultivated in future. Renaming the young actor ‘Conan Lee’ and teaming him with veteran fight-choreographer Yuen Kwai, Ng See Yuen unleashed ‘Ninja In The Dragon’s Den’ on the unsuspecting Hong Kong public. Not only did the results prove very successful in terms of worldwide box-office revenue, but they also made Conan Lee a star.

In a familiar narrative that is given a slightly different edge, Conan Lee plays a hot-headed young fighter who enjoys his brand of harmless buffoonery in the local town without a care in the world. This calm existence is put in danger when a mysterious assassin targets Lee’s adoptive father and will seem to stop at nothing to achieve his goal. The assassin is in fact a Japanese Ninja who is seeking revenge for his father’s death, a death a mistakenly lands on Lee’s adoptive father’s shoulders. Naturally Lee decides to use his own well-developed skills against the aggressor and, during a series of confrontations, the two are well-matched. After another misunderstanding, the two are thrown together in one final battle; an ornate fight throughout a multi-floored pagoda. As the epic encounter progresses, each of the combatants begins to learn more about the other and the truth behind the current series of events. Time to discus this in depth is quickly put to one side though when the two must team up against a formidable villain and his numerous lackies. All is resolved in the film’s blistering final reel.

As was mentioned, ‘Ninja In The Dragon’s Den’ takes a conventional storyline and gives it a slightly unusual twist. For years, Hong Kong cinema had pitted Chinese heroes against Japanese foes, but here the two races are merely enemies through a misunderstanding and the film’s finale shows the strength of their teamwork. The film will not specifically be remembered for this pleasant twist however; for a martial arts film, it must always be the action that makes or breaks the reputation of the production. Fans of well-choreographed action can rest assured that ‘Ninja In The Dragon’s Den’ is packed with a number of excellent fight scenes and gimmicky encounters. Seeing a Chinese fighter against a Japanese Ninja is something that audiences had enjoyed in Liu Chia Liang’s classic ‘Heroes Of The East’ and once again here the contrasts in styles makes for highly entertaining viewing. The film does suffer from an over-abundance of comedy even in some of the film’s serious moments, but this does not irritate to any particular extent. Instead, ‘Ninja In The Dragon’s Den’ stands out as a fully-accomplished kung-fu comedy with superb fight action. With an expected DVD release from Hong Kong Legends in the near future, this is another necessary purchase for all Hong Kong film fans.