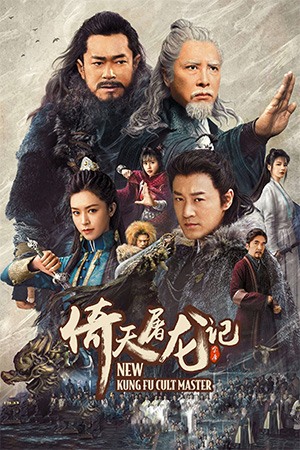 One of the pieces of cinematic revisionism that irks this reviewer is the strange regard that Jet Li’s ‘Kung Fu Cult Hero’ is suddenly held in. Released in 1993, this adaptation of Louis Cha’s labyrinthine ‘Heaven Sword & Dragon Sabre’ was puerile, preferring to highlight the very worst of Wong Jing rather than the skill of the impressive cast. I vividly remember being mortified on seeing it shortly after its release; the only minor saving grace was some loopy action but even this couldn’t quite make up for the ludicrous pantomime. Nearly thirty years later, I was hardly thrilled with the idea of Wong Jing releasing a big budget update of the same source material.

Zhang Cuishan (Koo) and Yin Susu are from two opposing clans in the increasingly blood-stained martial world. Their attempt to raise their son, Zhang Wuji, in peace is disturbed by an attack by the clans, one that leaves Cuishan dead and Susu on the run with her son. Although they try to seek shelter at the temple under the leadership of a kindly master (Yen), the other students force Wuji to leave after he accidentally reveals hitherto unknown skills. At one point a mortally wounded Wuji is saved by stumbling into a hidden value and uncovering a secret technique that not only cures him but makes him practically invincible. Though Wuji seeks a life outside of the clan intrigue as he grows up, he is reluctantly dragged back into the war for the famed Dragon-Slaying Sabre.

‘New Kung Fu Cult Master’ starts with an exposition dump that quickly reminds the viewer how complicated the source material is and how even splitting it into a couple of two hour films is unlikely to do it justice. It’s such a vast world that Louis Cha created, and it is one that is peopled by scores of characters with endless motivations and agendas. Naturally, even focusing on a small part of the epic, things quickly get confusing, and the opening chunk of exposition does little to change this. And yet, despite this, there is a surprising amount to enjoy here; if you are willing to immerse yourself in this chaotic world, you’re in for two good hours of entertainment.

Films such as this do not treat newcomers kindly – there’s no gentle introduction into all the weird and wonderful phantasmagoria on display here. Yet when you start to understand the beat of these byzantine wu xia epics, it’s easy to savour the incredible visuals and never-ending cast of bizarre characters. And you find yourself quite accepting of the fact that characters can turn from hero to villain and back again in the time it takes to wave around some of those lovely wispy gauze robes the photogenic actresses wear. Unlike the 1993 effort, this updated version takes itself reasonably seriously and that works massively in its favour. Gone is the need for typical Wong Jing low-brow humour and there seems to be an attempt to create some sense of excitement here. For the most part, it succeeds; though the plot moves along at a dizzying pace, the characters and their grandiose back stories make it all entertaining.

While the action is more fantastical than the 1993 version – relying on computer effects rather than grounded choreography – the result is quite the spectacle. How much influence co-director Venus Keung had in reining in Wong Jing’s usual scatological tendencies is debatable, but their combined efforts seem to have produced something better than expected. The cast is solid (as you might expect of a big budget feature) while the whole production looks impressive, something that can’t always be said of films where Jing has had a budget to play with. ‘New Kung Fu Cult Master’ isn’t a great film, maybe not even a very good one, but there’s enough strengths here to make you eager to watch the second part. If nothing else, it’s taken the bad taste away from the 1993 version and its strange desire to be a martial arts pantomime. Living in something of a cinematic famine today, I’ll gladly take that.